Our 1920’s serial story, The Three Things was set in two parts of Florida (USA) — Santa Rosa Sound and Sarasota.  The second storyline, The Three Ingredients necessitated a change of setting and I took the serial to Savannah, Georgia.

Cookbook-2 Is on the Way

We’re about to begin the second “cookbook” of The Three Ingredients.  The “ingredients” took me to a supernatural twist, which served as a lead-in for the next incarnation of the serial.  So the Savannah setting was already perfect.  That old southern city has quite the reputation for hauntings!  When I was reading about one of the old buildings, which is now a hotel, it inspired the Daisy character. 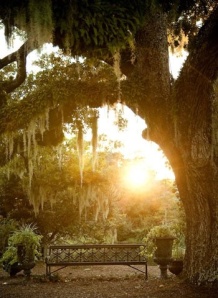 I hope to whet your appetite for the next incarnation of 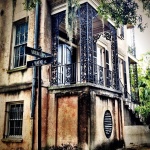 the culinary mystery serial by getting you acquainted with the ethereal side of our Savannah setting.  If you visit Savannah today, there are plenty of “ghost tours” to send a chill down your spine.  Almost every building in the historic district has its own ghost story.  It has been featured on television on the Travel Channel program America’s Most Haunted Places–Savannah, and on PBS’s Southern Haunts.  The list of haunts is too long to mention here, but here is a slide show.

Is there any wonder the charming city got its spooky repute?  You know the answer to 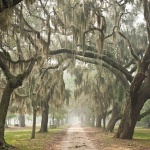 that question is “No siree bub!” if you’ve ever been there and taken a twilight stroll.  Streets are lined with stately live oaks draped in Spanish moss, magnificent in the sun. Ironically as the daylight diminishes the live oaks take on a ghostly appearance, as the moss gently sways in the breeze.  Shadows flit from place to place on cobblestone paths.  Unearthly sounds from the river drift to your ears.

But fear not.  The sun will rise on a new day.  I have confidence in Pip and company. Surely they will solve the mystery and reveal the killer of Daisy, the dainty dish.  They might even get some otherworldly help along the way!  Stick around for Cookbook-2 and get your “ingredients” ready.