It’s hump day and I needed a boost to get me through the rest of the week.  I avoid midweek posts, but I thought this might give me the lift I need.  When this song popped into my head (again) I knew I had to share.  Because I’m getting ready, ready, ready for the takeoff!  What I mean is the launch of Murder at the Bijou, Three Ingredients-I.

It’s a Roaring Twenties culinary mystery.  It was spontaneously written as a “pantser” serial here at this blog.  Everything, event, and character in the story was inspired by things or ingredients the readers of this blog sent.  Now, as I’m closer and closer to takeoff I wanted to show you my concept of the characters.

The Three Things gave us Pip (Paisley Idelle Peabody), the narrator of both story-lines. I was so fond of Pip, a flapper and aspiring “modern woman,” that I kept her around for The Three Ingredients. I added her grandmother, Granny Phanny, and the fledgling catering business so that we could have the culinary mystery theme.  The rest of the story is inspired by your ingredients.

The moment I stumbled upon a photo of a very young Lucille Ball, I imagined the voice of grown-up Lucy as Pip, telling the stories of her youth.

Phanny Irene Peabody.  Granny is actually a “Pip” too.  Her given name was Phanny Irene, and when she married into the Peabody family her initials became P.I.P.

I never found a photo that seemed like Phanny to me.  I only had a vague image of her in my mind, a woman with delicate features, but a backbone of steel. However, in a photo of Margaret Sanger, I saw Granny’s kind heartedness, firm resolve, and spunk.

From this point, I’ve listed the characters in order of their appearance in the story.

The very first ingredient (geoduck) was the inspiration for Alastair Wong.  The Wongs immigrated to the United States from England, and Alastair has a faint British accent.  Neither he nor his parents had ever been to China, though they dreamed of visiting and faithfully passed down family recipes used at Wong’s Chinese, their restaurant. Alastair is a talented businessman and chef.

Long time followers of this blog will recall that there are two Alastair Wongs.  The first one  you meet is the younger. Later, in Copper, the Alchemist, and the Woman in Trousers, you meet his grandfather, Alastair Wong the elder.

I had a small crush on Alastair, so his prolonged absence during the serial should show you that it really is guided by your ingredients.    :o)

I think a vintage photo of Sessue Hayakawa could be Alastair — if I could find one of him in a less somber, brooding mood. Alastair certainly has a serious side but he also has a beautiful, ready smile.

Alastair’s mother, Arabella also appeared in Episode-1 and she is mentioned a few times afterward. However, the ingredients haven’t led to a larger part for her… At least they haven’t yet. Only the ingredients can say!

A vintage Vogue magazine cover made me think of Arabella’s graceful elegance, though there has been little opportunity to describe her.

The Binghamton brothers are actually “walk on” parts.  However, when I started looking for character images, I wasn’t sure where the ingredients might take them. So I’ve included them anyway.

Byron is the owner of the Bijou Theatre. That setting is where our storyline began, when “the dead man” was found.  Bradley Binghamton, Byron’s lookalike brother is seen much later.  They were minor characters, but necessary to the story just the same.  Something tells me that there might be some sadness in the history of the brothers, and this shot of David Niven in “The Bishop’s Wife” could be either of the lookalike brothers.

Jack Daddy was a minor character who was fundamental to the storyline. His nickname was Cracker Jack because he was a skilled safecracker and a mobster.  Maybe he was not 100% bad if he was Cracker the Parrot’s “daddy.”  However, I don’t think we’ll ever know for sure.

When I received “cinnamon” as an ingredient we got Cinnamon Bun, a Flemish Giant Rabbit with reddish fur.  You recently saw his back-story in the vignette, Granny Phanny and the Giant Rabbit.  The veterinarian, Vincent Vale gave him to Granny Phanny. She adores the oversized bunny, and so does Cracker the Parrot, who often brings Cinnamon Bun treats.

We also meet Detective Dabney Daniels of Savannah’s finest. The moment I saw a vintage ad for Arrow shirts, I had an image for Dabney. He has known Granny Fanny for some time, and helps her with heavier work around her cottage. Dabney seems to take an interest in Pip, letting her ride along for part of the murder investigation and work at cataloging evidence. Is Granny trying to push the two together?

Detective Daniels has been patient with Cracker, even thought the parrot bit his ear. He shows concern for Granny, and for his fellow law enforcement officers. Though he seems emotionally distant to Pip’s way of thinking.

Our veterinarian is Vincent Vale.  He has broad knowledge and training for a veterinarian of that era, including acupuncture.

Vincent seems like a gentle soul. He rescued both Cinnamon Bun and later Cracker.  Together, he and his wife Veronica built an impressive medical facility for animals of all types.  Who else would I imagine as Vincent Vale but “All Creatures Great and Small” actor, Christopher Timothy.

The ingredients included “graham cracker” and of course that gave us Cracker the parrot.  Granny Phanny resisted liking that “nasty bird” for quite a while.  But Cracker’s unexpected devotion to the injured Marshal Moses Myrick won Granny over.

Cracker is a most unusual and clever bird. The one thing we can expect from this parrot is the unexpected.  Cracker learned many things related to the various mysteries in this storyline through her association with Cracker Jack Daddy, her late owner. When Vincent Vale examined her, he said Cracker was about 40 years old, so we can only guess at the scope of the parrot’s life experiences.

She definitely has opinions about the humans in the story. Cracker took a dislike to Dabney Daniels, perhaps associating him with the death of her “daddy.” But she loved Moses Myrick and the rabbit, Cinnamon Bun from the very start. It took her a while to win Granny Phanny’s affection, but she did. Cracker seems to like Pip and the poodle, Cotton. And she at least tolerates Hank Hertz.  However she shakes her foot as an expression for her disdain of “The Joker.”

The pantser writing of this serial also brought us the wife of Vincent Vale.  Mrs. Veronica Vale is an accomplished medical doctor and surgeon who has traveled widely. She is the most accomplished woman Pip has ever met. At Pip’s determination to be a “modern woman” Granny introduced her to “the real deal.” Veronica’s intelligence is matched by her good nature and sense of humor. Both the doctors Vale are caring, generous people.

She performed emergency surgery on Marshal Myrick after he was ambushed by the bootleggers. Vincent is a veterinarian, rather than a “people doctor” but he proved his skill too during the operation. Granny revealed yet another skill, acting as surgical nurse. 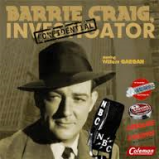 One of the ingredients was “peas”… and we got Moses Myrick.  Go figure, right?  That’s just how my brain works. Pip was distrustful when she unexpectedly learned that he’d known her grandmother for a long time, and apparently quite well. So her first reaction to Marshal Myrick was less than positive, “He was very polite and all, but I couldn’t help thinking what beady little eyes he had.  Green eyes… like little peas!”

I saw an ad for a vintage detective story, and thought the man could easily be Moses Myrick. He wins Pip over, and Cracker likes him right away. He seems to have an affinity for the parrot… and a history with Granny Fanny.

The Queen of Clubs is introduced halfway into the story.  I was looking for a vintage queen of clubs card, when I found celebrity playing cards. Guess whose picture was on the queen of clubs?  Joan Crawford. From that moment, there was no other choice for Queenie Wetson.

A reader wasn’t thinking when leaving ingredients for me. I faced a challenge. I try not to put restrictions on your ingredients, but one of the items was microwave. I knew it was meant as the microwave ovens we use today, but as I suspected, my research showed they had not been invented in the 1920’s.  However, scientists had long known about microwaves. That gave us a new character, Hank Hertz.

Our Hank is the fictional grandson of Heinrich Hertz, who proved the existence of radio waves back in the late 1880s. So the “microwave” ingredient gave us Hank, who is a wizard with the police radio. It also led to more layers in the mystery — Since the gangsters were using  open radio transmissions (microwave brought us to radio waves) they used code names.

As I visualized Savannah’s youngest policeman I thought of a TV actor who could easily play Hank — a slightly younger version of Hugo Johnstone-Burt who played Hugh Collins on “Miss Fisher’s Murder Mysteries.”

In a planned (or technically correct) story I would not add new players so late in the tale.  However, the spontaneity unexpectedly led me to new characters — including Daisy.  Also called The Dainty Dish, Daisy was the second Mrs. Henry Kingston. Her story was a local legend, according to which she was given to him as a payment for a gambling debt, but Kingston fell madly in love with her. Her story line continued into the next serial.

The domineering major domo was also introduced late in the story.  At first I saw him as a stodgy old

man… but then the ingredients suggested that he could be an interesting complication to the story.  That’s also when his name came along.  Maybe his name, Farceur, is significant, or maybe it’s a red herring — only the ingredients know for sure!

For a moment he had been a nameless, faceless butler. When a classic anime character pinged into my mind, I indulged myself with the image of “Black Butler” Sebastian Michaelis.  How could I resist?

So there you have it — most of the characters for the soon to be “book-ized” Murder at the Bijou, Three Ingredients-I.  Thanks for reading and have a wonderful Wednesday!

99 thoughts on “The Characters, Murder at the Bijou”