This post is already live at KC Books & Music.  I’m also posting it here so that it will be in my library too.  I hope you’ll click over and visit Kev, my host.

Book Talk Gets Magical with Kev and Teagan

Today I’m here with another Book Talk with Kev at KC Books and Music.  I’ve done some joint posts (click here), such as vignettes featuring my characters combined with recipes from Suzanne at A Pug in the Kitchen.  So when Kev and I discussed me doing some “Book Talks” I got the idea to do something similar — but with his music!

I know that lately I’ve focused on my 1920s serial stories , The Three Things Serial and (coming up this spring)  I’m getting ready for the take-off of the second one, Murder at the Bijou, Three Ingredients-I.  However, my Atonement, Tennessee “universe” seemed the best fit for Kev’s music.  When I asked Kev to pick something, he suggested his compelling and lovely song, Magical.

Kev, would you say a few words about your song here?

I would love to Teagan, thank you. Magical is a love song/ballad where the artist expresses how his world has changed as if by magic since his lover came into his life. It is a song about the essence of falling in love. The original song was written many years ago. Last year, I thought I should do something with my song, Magical since I’ve finally started to have some of the songs I’ve written over the years recorded and released. I changed some of the lyrics to bring them up-to-date, but the music remains the same. It’s a mellow arpeggio played upon a classical guitar to keep the ‘magical’ feeling or mood, if you will.

No wonder I liked the song!

Kev and I both agreed it would be fun if I used something from the point of view of Lilith the calico cat.  Kev’s Magical is how I imagine Gwydion’s magic working on Ralda Lawton if everything had been well… right.  However, in quirky Atonement, Tennessee magic is rarely gentle.  So (as with most things in my fictional town) the magic Lilith witnesses Gwydion perform does not go as planned.  My the snippet does not go in the lovely way of Kev’s song, but it’s definitely magical.  From my work in progress, Atonement in Bloom, take a look at some of the magic Lilith saw.  The scene is followed by a trailer I made for the book-to-be. 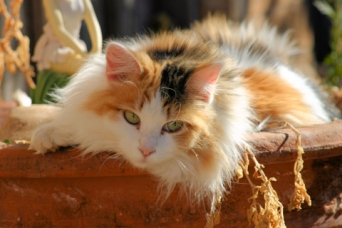 Lilith watched in fascination.  She could feel the magic in the air, even though the men didn’t appear to be doing much of anything.  She could particularly feel Gwydion’s power.  It made her skin tingle and the fur at the back of her head ruffled.

Gwydion used a stick to scratch at the ground at the foot of a giant old oak tree.  He dropped seeds there and deftly covered them.

Fine powder glittered in the moonlight and settled on the fresh dirt where the seeds were buried.  Gwydion stepped aside allowing the moonlight to touch the seeded ground.  Sprouts appeared immediately.  Before Lilith’s watching gaze they quickly grew into mature plants — small but ethereal blossoms of white and pink meadow sweet along with branches of the broom shrub, heavily laden with yellow flowers.

The unnaturally strong scent of the blossoms was powered by Gwydion’s fae magic.  The flowers ran vine-like and entwined with the ancient oak as it started to surge and pulse.

The huge and ancient oak had a split in its center that looked like a gaping maw.  The tree shuddered and groaned.  Two limbs, each thick as an adult human’s thigh, writhed and twisted.  As the limbs twined together and merged, they took on an undeniable resemblance to the form of a woman.  The branches became crossed legs, an arched back, and arms outstretched.  The head was held back and the placement of the oak’s bark created an agonized expression on the face.

Lilith crouched down fearfully, but was mesmerized by the horrible scene.  She was unable to turn away.

So there you have it… Kev’s Magical, and how it might go as a musical component to my story. Thank you Kev, for hosting me for this Book Talk.  Even if I could resist a pun, I’d still have to say it was magical.

54 thoughts on “Book Talk Gets Magical with Kev and Teagan”