Should I call this a book launch?  That just doesn’t feel right, because I already did this story (and others) here at Teagan’s Books.

When I started this blog at the end of 2012 I did a few posts.  By 2013 I wanted a theme — something more than just talking about my novel (Atonement, Tennessee) each week. That’s how the first of my serials began — The Three Things.

While any of the serials were being created here at this blog, people would ask for a book version.  So I’ve finally made time to do the first book version!  Of course I’ve started with the first serial.  It’s only a novella in length.  Here’s the Kindle version and the paperback.

So allow me to present to you, The Three Things Serial Story, a Little 1920s Story.  (Amazon UK link.)

What’s in It for You?

Wherever you are, leave a comment and you will be entered in a random drawing (like the random things!) for an autographed paperback of The Three Things Serial Story.  The names will go into a box and my objective judge will draw the winner’s name.  That’s her in the box now, waiting for comments.

Everyone is eligible for the paperback 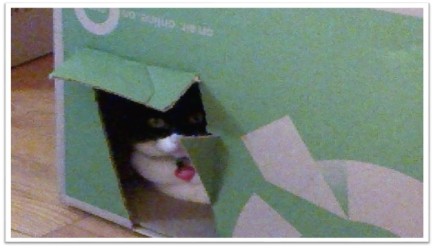 I’m using an “Amazon giveaway” to  provide two copies of the Kindle version of the book. (I’m sorry, but this is only available to folks in the USA.)  Enter to win at this link: https://giveaway.amazon.com/p/c826e4f1836eb006

The Story Behind the Story

It was 1995 when I developed my “Three Things” writing exercise.  Admittedly I’m easily entertained, but it seems to amuse others as well.  I get three random things and write until I’ve mentioned all of them.  So in 2013 I had the thought that it might be fun to do that here, and let everyone participate.  That day I put the pen in your hands… and so it began.  The serial took shape and this blog grew with it.

Everything about this story was determined by the random “things” readers sent.  Absolutely nothing was pre-planned.  First came the narrator, Pip, aka Paisley Idelle Peabody.  I imagined the voice of Lucille Ball as Pip, telling a story of her youth.  Then came the 1920s setting, inspired by oscillating fan. Next the “things” brought characters, particularly Andy who came back for another serial. Eventually a thing gave me the Florida setting.  I think you get the idea of how this worked.

Pip, a modern woman — a flapper, begins the first of several adventures.  In this story a mysterious white-haired woman is kidnapped.  Pip finds a bent key, a scrap from a special quilt, strange tattoos and other “things.”  Later, Pip and her friends find themselves on a luxurious yacht where they encounter figures from history and celebrities of the era. The mystery comes to the forefront when they reach the destination, the gilded mansion, Cà d’Zan. 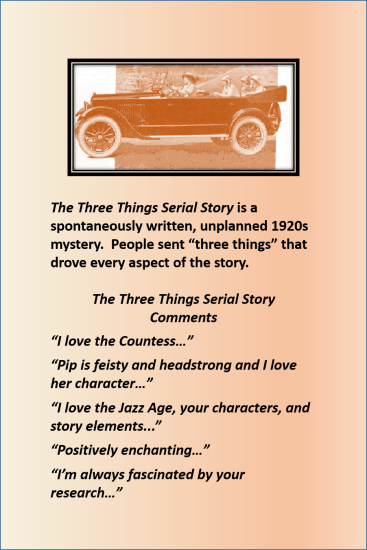