Welcome, my friends.  Have I told you how much I appreciate your visits? Well, I do — a lot.

Before I present Three Things, here’s the promised update on my National Novel Writing Month progress.

Well, there hasn’t been a lot of progress. As of right now, I’m barely on schedule to finish on November 30th, and the weekend is nearly over. Maybe more caffeine…

Today I’m showing you a few pictures from the late 1960’s of places my Guitar Mancer characters visit. One of the first scenes is in fictional Blaylock Sound Magic Studios. Here’s an example of equipment a recording studio of the era. All that could be on one tiny device now. 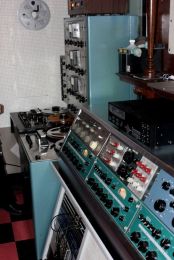 I can’t say anything as spectacular sounding as top last week’s “I killed a basilisk.” However, most of my main characters had their first big confrontation with the arch villain. And our heroine, Luci, showed that she’s got plenty of spunk!

The Guitar Mancer will touch multiple locations. As I’ve mentioned, it begins in Nashville, Tennessee and the Old Hickory Lake area.  I don’t think this composite image is vintage at all, but with the exception of the stadium, most of the buildings would have been around in the era. From top left: 2nd Avenue, Kirkland Hall at Vanderbilt University, the Parthenon, the Nashville skyline, LP Field, Dolly Parton performing at the Grand Ole Opry, and Ryman Auditorium.

One character I got to spend a lot of time with last week was Frejya, a red tailed hawk. She’s developing more firmly in my imagination than I expected and I enjoyed writing about her.

Frejya is a “spirit animal” and in the mythology I’ve created for The Guitar Mancer she is also a magical totem. Maybe I’ll tell you about her “person” next time — that’s Bodaway Thunder.  Though he’s not the main character, I beginning to wonder if he might not need a book of his own!  Bodaway is one unique guy.

Frejya has been very hard at work this past week.  Ask her about B. B. King’s guitar, Lucille if you want, although I don’t think she’s talking about her part in that escapade. But she sure is being smug…

I’ve given all the important characters names with meanings related to their nature and/or capabilities. If you enjoy name meanings you’ll like that. If not, then it won’t bother you either way.

A beautiful phonograph stood in the corner.  It was surrounded by a little track with a clockwork train.  Frankie stooped down to investigate the train.  It was painted red with yellow trim, and the coal car had a Hornby logo.  In a second Frankie had it chugging around the little tracks.  His eyes lit up like a child’s.  He blushed in a cute way when he realized I was watching him, murmuring something about the workmanship. 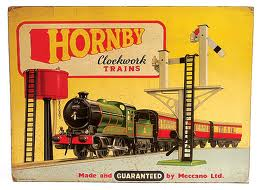 I wanted to rib him about it so bad that I had to bite my lip to stop myself.  Frankie was really the cat’s meow, but I hadn’t known him that long, and I wasn’t sure how much teasing he could take.  So I played it as seriously as I could manage.  “Yes,” I agreed.  “The attention to detail is quite punctilious, isn’t it?”

Frankie tore himself away from the model and stepped over the tracks to get to the phonograph.  The fireman gave the handle a few cranks and the sound of “I’m Forever Blowing Bubbles” filled the air.

Flavio was sitting next to Mona on the chaise lounge, whispering things that brought gales of giggles from her.  Frankie looked over at me and I made a derisive face at the other two.  This shindig was going to give Mona plenty to write about in her diary.

While I was browsing around the New York Times, I stumbled upon “The Janeiac Quiz.”  Since I’ve always enjoyed Jane Austen‘s books, I took the quiz — and failed miserably.  I’m sharing it because many of you enjoy those classics.  Emma is probably my favorite of Austen’s works and it is also the source of today’s Three Things.  I’ll take them from the first sentence of the book.

“Emma Woodhouse, handsome, clever, and rich, with a comfortable home and happy disposition, seemed to unite some of the best blessings of existence; and had lived nearly twenty-one years in the world with very little to distress or vex her.”

I told myself not to feel vexed with Mona for acting silly with Flavio.  Then I told myself again.  When I told myself the same thing for the third time Frankie chuckled.  There was no telling what kind of expressions had gone across my face.  He raised his eyebrows and made a mock-hopeful puckered face.  I grinned at him and said, “Sorry fella, the bank’s closed.”

“Dr. Banting said to make ourselves at home.  Why don’t we look around?  I don’t know about you, but I doubt I’ll ever be inside a yacht like this again,” he said with a smile.

He was right.  And I needed to get back to business.  Where was that microscope?  We left Mona and Flavio still giggling.  The next cabin we came to was open, but Frankie knocked on the doorframe just in case and called out cheerily.  The fireman really did have a happy disposition.  I squeezed past, under his arm.  Frankie actually was a very nice height.

Then I spotted it sitting on a table in the corner, all brass and shiny – the microscope.  It was hard not to look at the beautiful estate in the painting that hung above the device.  The place looked like a Venetian palace, and the yacht moored there looked like the one we were on!

Frankie gave a low whistle.  “That looks like a… comfortable home.” 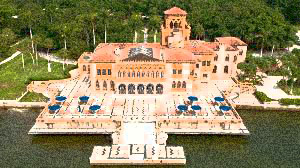 “You’ve really got a gift for understatement,” I agreed.  The house in the picture was huge and in a beautiful setting.  “That place is the berries all right.”

I took the ornate but bent key out of my purse and carefully placed it under the microscope.  However, I couldn’t make out any words – and I was afraid to move any of the settings.  I could only guess how expensive the thing was; scientific things were always pricy.

The engraving looked like it might be just a pretty design, but with the damage it was hard to tell. I held my breath and barely moved one knob on the microscope.  A word came into focus, but it was hard to make it out amid all the swirls of the engraved pattern.  “Ring… Ringing?  No.  Ring-ling.  Does Ringling make any sense?”

“Ringling?” Frankie repeated in an incredulous tone.  “As in circus?  That Ringling?”

“Applesauce!” I exclaimed in an awed whisper.  “Do you think this key is for the Ca’d’Zan mansion in Sarasota?”

Our speculation was interrupted by the sound of a scuffle.  A man’s voice boomed.  “You’ve got what you wanted, now be off with you!  If you ever think to pull a stunt like that again, it will be your last!”

We hesitantly peeped out the door in time to see two men leaving right after those ominous words were shouted. There was a man in the doorway of a cabin, shaking his fist at the departing backs of the men.  Then someone shrouded in an old quilt pushed past the man.  I heard a muffled sob.

The man lowered his head and said, “Don’t worry.  They aren’t going to hurt anyone else.  We’ll see to that.”The quilt covered shape turned toward him.  The tattered covering fell back to reveal an older woman, who was still elegant despite her somewhat disheveled appearance.

It was the white-haired woman.

Tune in again next weekend.