Welcome back to Jazz Age Wednesdays!  You’re all the cat’s meow, but this 1920s story went to the dogs!  Whether it is one dog or four remains to be seen.

I shared this short story a while back in collaboration with A Pug in the Kitchen* where blogger-chef Suzanne cooked up some dog treats that looked good enough for human consumption.

On to the Jazz Age!

The dog of the title, Wriggles, was introduced in the third of my blog serials, A Ghost in the Kitchen, Three Ingredients-II.  In that story he was a new dog for the character, Arabella Wong.  However, this vignette takes place prior to that story.  So I made Wriggles a puppy and gave him a different owner.

Did you ever get the feeling you’d have to be “hit over the head” with something before you finally got the message?  Well, that was true of Pip.  Here’s our flapper to tell the tail… eer tale.

Pip Sees a Pug… or Four

That was definitely him.  The last time I saw Floyd — which was also basically the first time I saw him, the police were putting him into the paddy wagon when they arrested some bootleggers.  Yet there he was on a side street in Savannah.

Maybe all that with the coppers was just a mistake, I thought hopefully.

After all, Floyd was as sexy as the Sheik of Araby.  Then I remembered how rude he had been to me and Alastair Wong.  He didn’t seem sexy at all before that thought even got halfway across my noodle.  However, he heard me and looked over his shoulder.

“Well now, aren’t you a choice bit of calico,” Floyd said as he turned to walk toward me.  “Oh, it’s you!  You’re a real bearcat, but you’re bad luck,” he said.  “Go chase yourself,” he told me and spat on the sidewalk.

I know.  I should have ran the other way and not even called out to him.  However, in the small Florida town where I grew up, if you saw somebody you recognized, then you said hello to them.  I didn’t see why Savannah, Georgia should be any different.

I don’t remember what I meant to say to Floyd when he started to continue on his way, but I opened my mouth to speak, taking a step toward him.

Floyd shoved me and kept going.  Unfortunately I also kept going — backward.  I slipped, fell, and cracked my head.

I think I was actually unconscious for a minute or two.  Then I felt something wet wiped across my face.  When I opened my eyes, the world was a spinning blur.  I saw a little pug dog.  It licked my face.  It was wearing a top hat and bow-tie, and smoking a cigar.  As I gazed at it uncomprehendingly I realized there were four of them.  However, when I held my hand out toward the dog, I seemed to have an uncountable number of fingers.  So I figured there was only one dog.  I wasn’t sure what to think about the hat and cigar.

The sound of a police whistle prompted me to try and sit up.  There hadn’t been any “mistake” about the coppers hauling in Floyd.  He had probably escaped and they were after him again.  A voice intruded on my thoughts.  I realized it had been trying to get my attention for a while, but it was hard to hear it over the bells ringing inside my head.

“Huh?” I mumbled, looking for the source of the voice.

“Young lady are you hurt?” asked what must have been the world’s oldest woman.

Her face was so covered in creases and crow’s feet that it was impossible to imagine what she must have looked like in youth or even in middle age.  Even so, bright eyes shown sharply from between the wrinkles. 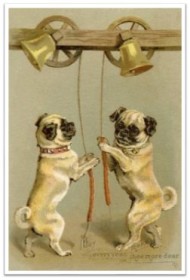 Despite her fragile appearance she took my arm in a vice like grip.  She put her walking-stick in my hand.

“Wriggles, get off the poor thing!  That’s a good boy.  I’m sorry, he’s still a puppy.  Here dear.  Use my cane to help yourself up,” she said but proceeded to help me up with unexpected strength.

Once I was on my feet, if shakily so, I looked at the pug.  There was only one of him.  The hat and cigar were gone.  That much was a relief, but he still wore the bowtie.  It bothered me that I wasn’t sure whether or not the tie was really there.

Moments later I sat at the kitchen table in the woman’s tiny home.  It was a good thing she lived right around the corner.  I was dizzy and my head felt like it had gotten in the way of a sledgehammer.

A young boy “helped” us get inside her backdoor on the pretext of getting a cookie.  However, she gave him an errand.

“What’s your name, dear?” she asked me as she handed me a cup of tea.

I noticed the cup had been cracked and repaired.  The one she used for herself had a chip in the rim.

“Peabody?  Would you be kin to Phanny Peabody?”

“Billy,” she addressed the little boy.  “Take another cookie and run down to Miss Phanny’s house.  Let her know her granddaughter is here.”

Billy’s eyes lit up at the prospect of helping.  Although the extra cookie didn’t hurt.  He took off like a rocket before I could protest.

The pug, Wriggles barked as if he picked up and shared the boy’s excitement.  I reached down to pet him and the little dog wagged his tail so hard that his entire back half wagged along with it.  The woman handed him a treat which was gone before I got a good look at it. 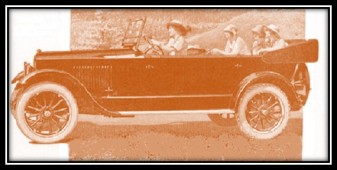 “Paisley, I know you’re from a small town,” Miss Olive began.  “You come from honest, trusting folk.  But in this day and age, a young lady alone has to be careful.  Now, you tell Miss Olive if that man did anything he shouldn’t, you hear?”

I shook my head and immediately wished I hadn’t.  “No.  I recognized him and just meant to say hello.  It would have been rude not to,” I replied and was rewarded with a smile.

The elderly woman patted my hand.  I put my nearly empty teacup on the table and thanked her.  Miss Olive took my cup and swirled the dregs looking at the contents curiously.

“You haven’t gotten off to the best start here in Savannah, have you Paisley?” she commented consolingly.  “But you will make good friends here,” she swirled the tea again and a smirk, a smile she seemed to try and suppress came to her lips.  “And you will have grand adventures.”

I heard the sound of Granny Phanny’s Model-T outside.  Wriggles lived up to his name, wagging his tail excitedly, as he yapped to make sure his lady knew she had company.  Miss Olive put the tea kettle back on the stove.  I felt comforted by the entire scene.  Safe.

Pip’s life in Savannah, Georgia got off to a rough start.  However, she’s making quite an assortment of good friends.  I think our flapper tends to bring out the best in people… except Floyd.

Once again I engage in the requisite shameless self-promotion…  Here are links to the books about Pip and her friends.

Thanks so very much for visiting.  You’re the bee’s knees!