Welcome back everyone.  Thanks for coming to Atonement, TN! 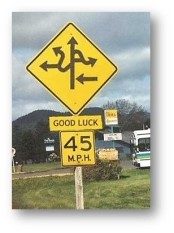 It’s great to see you again  — I know it can be hard to find your way to a fictional town.

I’ve been delighted with everyone’s support of my “pantser” serial stories.  As most of you know, those stories resulted from a writing exercise I created for myself long ago, and I turned the exercise into something to use on my blog.  The serials are propelled by three things sent by readers.   You can find links to them at the top of this page.  I like to say they are pure pantser fun.

I’ve used the same spontaneous method to “at least keep myself writing” on my novels.  However, my books are planned (at least to a degree) so the spontaneous exercises aren’t always usable for the novels.  It’s a “That’s Good, That’s Bad” sort of thing.

(My dad liked this skit, and the good-but-bad concept stuck with me throughout my life.)

However, I realized Three Things would be a good way to share something from my “Atonement Universe” — something that wasn’t another snippet from either book.  With “Annie’s Inventory Notes”  I told a “secret” part of the story that might not even be in the books.  So I’m using Three Things in a similar way.

To get my “things” I went to the first three comments from last weekend’s blog.  (Besides, you know I love to give a shout-out.)  I’m taking one thing from the title of each of those blogs.  Those commenters were from the following:

As I write this introduction, I have no idea where this Three Things exercise will take me.  Here goes…

The voice on the radio crackled as she drove through another area with little reception. The DJ counted down the top hits of 1974. Marge pushed her big glasses back on the bridge of her nose and hoped she wouldn’t lose this channel before hearing a favorite song. The glasses were very similar to a pair she’d seen in a picture of Elton John. She his flamboyance.

You see, Marge Tipton wanted more than anything to be a wild child, a rebel, antiestablishment. However, the truth was she just didn’t know how. So she left her southeastern home and as her family put it, ran off out west.  She stopped running just after she crossed the Texas state line. Marge lived there for ten years. Then the post cards started coming.

The writer of the cards was her brother, Tracey. She didn’t know why her brother moved to the strange sounding Tennessee town a year before. It sounded like he didn’t have much choice in the matter. With each post card Tracey’s state of mind seemed to get worse. He was not pleased with his life there, yet he refused to leave. In his last missive Tracey begged his sister to come to Atonement, Tennessee.

Marge was not happy about the situation. She rebelled against anything she felt she was “supposed” to do, and she knew that everyone would say she should help her brother, regardless of whether he deserved it or whether it ruined her own life. Marge had been perfectly satisfied in her western home. However, Marge had a sense of duty that was as strong as her wish to defy the establishment. So she got into her pickup truck, leaving Texas in her rearview mirror, and headed to Tennessee.

The gas gauge in the truck steadily crept toward empty. Just as Marge was getting worried she spotted a sign for a gas station. At first she was relieved in more ways than one, but when she got closer, she saw the smaller sign below the oil company’s logo. “No facilities.” Marge grumbled to herself. Maybe, if she was real polite, they’d let her use the employee restroom.

Okay… As you see, I ended up writing about a minor character who appears in both book-1 and book-2, Marge Tipton.  Previously I hadn’t given a moment’s thought to the back-story for Marge.  However, the spontaneous exercise led me to write about her relocation to Atonement, TN back in 1974.  That’s good.

No, this snippet is not something I can use for “Atonement in Bloom.”  That’s bad.  Also I doubt that the part of Marge Tipton will grow as a result.  Even so, as a writer I feel good to have a fuller sense of this character, minor though she may be.

Marge Tipton eventually opened “L.O.L.A. Lola’s Bar and Restaurant, the diner frequented by my characters.  One of Bethany’s favorite menu items is the Cobb salad.  So I searched the WordPress countryside for a recipe.  That led me to Sherri at the Eden Market blog.  Her photos are beautiful and I think you’ll enjoy visiting there.  Click on her photo below for the recipe.