In the past, part of my “real” job was writing a weekly motivational message.  I was basically “ghost writing” as/for the Senior Executive Service level director where I work, but he never made any secret of the fact that I wrote his messages.  (That was a couple of “Directors” ago.)

People would ask me (especially if they knew there were stressful or disappointing things going on) how I wrote such motivating missives week after week after week.  Well, believe me there were many weeks that I didn’t think I could write a single uplifting word.  But whenever I got started writing a message, I found that I was encouraging myself as much as I motivated my audience.  And if I heard the smallest whisper that I had lifted someone’s spirits, it sent my own faltering heart soaring.

That’s how I feel here, when anyone says I’ve buoyed them up in some small way — and that’s what keeps me coming back with a new chapter for you every weekend.  So I hope never to leave you completely adrift.

However, it’s a holiday weekend here in the USA, Memorial Day.  And I am in desperate need of recharging my emotional batteries.  I haven’t gotten to do any of the actual writing for the next episode.  Copper and the woman in trousers still stand in astonishment as the alchemist delightedly watches his submarine rise to the surface of the water.

I do want to provide some entertainment though.  So here’s a snippet from my unpublished work The Dead of Winter.  A few of you may have seen me comment that I’d love to see this massive book turned into an anime series.

Just like live-action television and movies, some anime is gratuitous (I’m sorry, the story isn’t more interesting just because you throw in over-blown gore in fight scenes, or nudity for no real reason. And a preteen in a garter belt is just plain wrong — I don’t care what your excuse is.  See what I mean?  It’s just like regular TV.)  But I find some anime preferable to other forms of film. It can be beautifully done, particularly the backgrounds.  Here’s a video with some examples of the kind of anime into which I’d like to see The Dead of Winter made.

(There are movie clips here.)

My story has a wide cast of varied characters, but the heroine is a twelve year old girl, Emlyn. The snip below is early in the story, from Emlyn’s point of view, in the cold place her world has become.  Within The Dead of Winter I also built a world with many nations, traditions, religions, styles of dress, and societies — and magic.  I hope you enjoy this little visit to the world I built.

From The Dead of Winter

It was neither light nor dark, though there was a strange half-light.  The dim shapes of furniture seemed familiar as Emlyn looked around the room.  She went to the window, but could not see anything beyond it other than gray darkness.  Goosebumps pricked her arms.  She took the shawl she was required to use to cover her hair and wrapped it around her shoulders.  She felt like she should know this room; and it disturbed her that she could not place it.  Worse she felt that she should remember not liking it.

She turned to go to the door and leave, but a musical tone pierced her ears, surging in volume, but then dissipating.  As the tone died she thought she heard a voice.  Emlyn shook her head, trying to clear it.  She moved toward the door, and the sound blended with the rustle of her skirts, but she was sure she heard it again.  She froze, listening, with her hand reaching for the doorknob.

Emlyn tilted her head.  Had she heard correctly?  Then it came again more clearly, but still little more than the sound of dry leaves, “Winter is coming!” 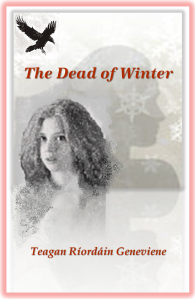 She turned toward the sound, but saw nothing more than the oddly familiar room.  Then suddenly he was there, across the room.  He was a stranger to Emlyn, yet she felt that she knew him, even though she couldn’t see his face clearly.  Shadow seemed to cling to him even more than it did to the rest of the room.  “Did you hear that?  Was it you who spoke?” she asked.  He seemed to rush closer to her, though his feet didn’t move.  She drew back.

“No,” he replied, “but it’s true.  Winter is coming.  The Winter.  The Winter of the ages.  I know those fools have tried to stifle knowledge, but don’t tell me you haven’t at least learned about that.  You of all people should know about the Winter.”

It was plain that she didn’t know what he meant, and that seemed to make him angry.  Her hands gripped her shawl tightly.  Suddenly afraid, Emlyn didn’t know how to respond.  The voice came again, louder, “Winter is coming.”  She blinked and he was only inches away from her.

Emlyn awoke with a start and sat up in her bed.  She let out a relieved breath.  She was safe in her little room.  Then she heard it in his voice.  “Winter is coming.”  He stood at the foot of her bed.  Emlyn thought the dream must be clinging to her, and she rubbed her eyes.  He was still there.  She blinked hard.  He moved toward her and sat on the side of 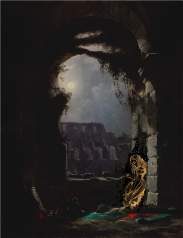 the bed.  As she felt the bed shift with his weight she screamed.

Her cry roused the household.  Afanen, her sister, was there first, and then her father and brother-in-law crowded into the tiny room, demanding to know what the trouble was.

“There was a man,” she said before she could stop herself.  Their expressions were first astonished and then scandalized.  Emlyn tried to take the words back by saying, “It was a dream.  Just a nightmare.”

Her sister cut her off and exclaimed, “I had gotten up and was on my way back to bed when I heard her – mumbling in her sleep about winter.  She kept saying that winter is coming.”  Afanen wore a bemused smirk that suggested Emlyn was just a silly girl and not to be taken seriously.  She had told people often enough that there was something odd; something wrong about Emlyn.

“If she’s dreaming of men in her room, then it’s time she had a husband,” Dewydd, her brother-in-law said, barely hiding his leer.

“It was just a dream,” Emlyn defended herself.  Her sister and brother-in-law left the room to go back to bed, whispering to each other.  She heard her sister giggle as the door to their room closed.

Her father sat down on the bed, on the same place where he had sat.  Emlyn cringed, wondering if somehow her father would be able to tell that someone; or maybe some thing had just sat there.  He had gone pale, and she thought his voice shook a little.

“Winter, you say?” he looked intently at her as he asked.  “Winter is coming?  As if it was more than just winter?”

“Well yes, that’s how it was in the dream,” Emlyn told him.  However, her father sat looking at her coldly.  He seemed to appraise her, trying to determine her honesty, as if he had caught her in some mischief.

“It was only a dream,” Emlyn stammered, “a nightmare.  Why are you angry?  I don’t understand.  I haven’t done anything wrong.” 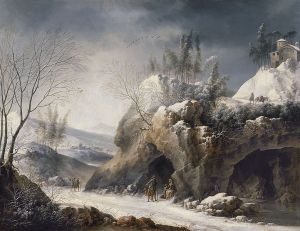 I promise to be back next weekend with Episode-18 of  Copper, the Alchemist, and the Woman in Trousers.

Update — I should have shared this to begin with. Now most of you won’t even see it… but here is a “pitch” for The Dead of Winter that will tell you about the story.  https://teagansbooks.wordpress.com/2013/03/02/pitchapalooza-the-dead-of-winter/