Many thanks to Chris Graham (aka The Story Reading Ape) for hosting me at his amazing Author Promotions Enterprise blog. “The Ape” generously promotes authors on his blog, and he offers excellent resources for our use. However, he’s also a gifted cover artist. Be sure to take a look at some examples of his work.  Also, he has started creating fantastic book trailers! (By the way, his trailers are much, much better than the one I have.)

Here’s the article Chris hosted for me.  It features my Lilith character from “Atonement, Tennessee.”

If you want to capture someone’s attention, whisper.… Maybe, but they

might not hear you at all. One way to capture a reader’s attention is to occasionally write from an unexpected point of view.

That can also be a practical tool, not just a “hook.” When I wrote Atonement, Tennessee, I decided to have my heroine narrate the story. However, there is a stumbling block with that kind of writing. My heroine could only tell about what she had witnessed. If she was not present for part of the action, someone would have to just tell her about it. Not nearly as exciting, huh?

So I wanted to occasionally shift and let another character be the witness. But who would be suitable? None of the people in my fictional town of Atonement, TN would be likely to see the events I needed to describe. Then I remembered an old exercise about writing from the point of view of an inanimate object. It was very enjoyable to me. Next I thought, what about an animal instead? 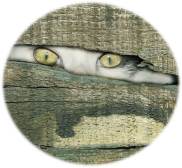 I gave my heroine a cat. At strategic points I make that shift and let the feline witness events. To bring you into the fun, I’m sharing a “character interview” I did with Lilith, the calico cat and part time narrator of Atonement, Tennessee.  Then I’ll show you a snippet of the novel written with the cat as witness.

Teagan: Lilith, won’t you come over here and sit with me?

(She looks all around the room — everywhere but at me.)

You’re even prettier than I expected. (Now she jumps onto the sofa. The compliment seems to have helped.) For this interview, the Creative Muse has given you the power of human speech. 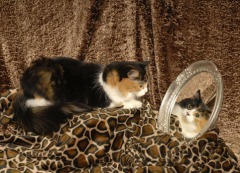 Teagan:  Now, Lilith. There’s no need to be contrary. You know you can talk for now. Take advantage of it. I understand you were a rescue kitty. Tell us about your life before Ralda adopted you.

Teagan:  (I sigh. Talk about catitude…) I think what everyone wants to know most about you is — are you really a cat? Or are you some kind of supernatural? Maybe an enchanted person who has to… atone?  Because, in all honesty, even though I wrote the novel, I do not know.

(Lilith narrows her eyes then turns her back on me and proceeds to wash her face.  Clearly that line of questioning is not acceptable.)

All righty then; I’m not going to get an answer to that one either.

Okay, moving on. You tell the parts of the story that Ralda doesn’t see. What about Cael? Do you know more about him than anyone else?  Wait — what’s that?  …Are you purring?

Lilith: Oh, Cael is simply divine. (Purrrrr…) Yes, I know more about him than Ralda does — even at the end of the story. He’s strong, courageous, faithful, and he knows about a lot more than is apparent. Cael is also childlike sometimes, which is an intriguing contrast to his strength. I also sense even more about him than I witness. I can’t really describe everything I sense. I can’t quite put my paw on some things.

Teagan: At least that brought you out of your shell. Ralda said you like attractive men. Anyway, I don’t think Ralda really trusts him. Do you know why?

Lilith: She can’t put her paw on it either. Or rather she can’t put her finger on it. Cael is truly extraordinary though. His backstory is only hinted at in this novel. I’m sure there will be more about him in “book 2.”

Teagan: What about Gwydion? Ralda seems to at least try to trust him. Should she?

Lilith: (She purrs again, even louder. Then she even turns halfway upside down, a paw across her face.) Ah… Gwydion! Oh he smells delicious, all manner of flowers and herbs and catnip. Did you know that he brought me catnip?

(Lilith sits back up, still purring.) Gwydion is a magical creature, you realize. His magic is tied to flowers. It’s not stated outright in the novel, but it’s pretty obvious. At the very beginning it’s even hinted that his grandmother was a faery. You know, Fae’s Flowers, named for his Gran?

Teagan: Who do you think would be better for Ralda, Gwydion or Cael? If they, so to speak, fought for her affections, who would win?

Lilith: Oh, it would be awful if those two actually did fight, wouldn’t it? They do seem to compete with each other in odd ways. But if they fought…  No, I couldn’t bear for either of them to get hurt! I’m not sure, but I have a suspicion that if it came down to it, Cael might be stronger than Gwydion.  However, Gwydion would have fewer — or at least different inhibitions so he might best Cael.  Oh, I’m just not sure. I really don’t like that question at all.

(Her tail makes a slash-thump against the sofa, signaling annoyance. Lilith jumps down from the sofa and sashays out of the room.)

I suppose that ends my interview with the cat.  However, you can read more from Lilith in Atonement, Tennessee.

And now for that promised excerpt…

Esmeralda slept. Lilith’s ears pricked when she heard a tiny rustling sound coming from downstairs. The first time she inspected the bedroom, the calico had found a way out. She hadn’t shown it to Esmeralda. Immediately on the hunt for the source of that sound, Lilith soundlessly got up from the pile of blankets on the floor where they slept. 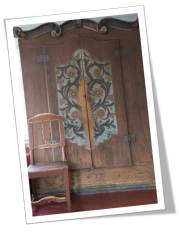 She trotted soundlessly to the tall heavy wardrobe. It was even bigger than the one where she found the mirror, and it reached almost to the high ceiling. It stood a few inches away from the wall. She squeezed behind the wardrobe. There was a gap in the wall. It was actually a door, which would open with a push. At some point in time, it had been left ajar. Lilith had originally found it because she scented the different air from the drafty opening.

Beyond the door was a narrow hallway and equally narrow steps that led to the parlor downstairs. She had a bit of trouble opening the door to the parlor. Fortunately it had a lever handle that was much easier to manipulate than a doorknob. After a moment her persistence paid off and the door creaked open. She stood still for a second. The rustling sound had diminished to almost nothing. The calico stalked into the living room. Her tail was held low and her body was close to the floor as she walked.

Her ears had more than twenty muscles, which the cat used to pinpoint the sound of a final rustle. She looked toward the flower arrangement by the windows. The white heather had grown and branched, vine-like until it covered every window and the front and back doors as well. All the flowers in the vase pulsed as if with a heartbeat. Lilith watched them for a moment to see what else they might do. 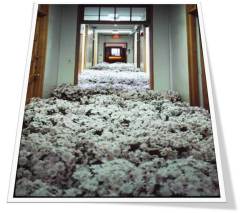 A sound came from the kitchen, and she went to investigate. It sounded like something had pressed against the porch roof for a moment and then pushed off. Immediately afterward she heard a few heavy beat and whoosh sounds, like extremely large wings.

She jumped to the kitchen window, but the heather covered it too, and prevented her seeing anything. However, through the little draft of air that came in around the window, she scented one of the odors she had tracked earlier that evening. There wasn’t enough of it for her to be sure which one.

After a while, the cat grew bored and returned to the secret door in the parlor. It was still open. She gave it a little nudge, using it to scratch her cheek, and it closed behind her. She returned to the bedroom.

I hope these examples have entertained you. Maybe you’ll want to try writing from an unexpected point of view.

38 thoughts on “Writing from an Unexpected Point of View”