Welcome back to our whimsical version of the Jazz Age.  You’re just the cat’s pajamas for coming back to this flapper tale.

I hope the characters in this 1920’s serial have wiggled into your mind so comfortably that you have your own ideas of how they would look or sound.  However, I thought it might be fun to show you how I imagine them. So in no particular order, please meet the cast of The Three Things Serial.

Better known to you as Pip

The moment I saw a picture of a teen-aged Lucille Ball she became my Pip. In my imagination the voice of a grown-up Lucy narrates The Three Things Serial, looking back on the adventures of her youth.

Pip might be a tad conservative, naive, or innocent as flappers go, but that allows her to take people as they are, without judgement.  Time and “things” will tell if that open hearted naïveté gets her into a pickle — or maybe a barrel of them!

The heart of a true flapper beats in Pip, and she is determined to be what she thinks of as a modern woman.

Thus far I’ve done three incarnations of this “interactive” serial.  Pip’s father has been mentioned many times, and he’s made a phone call or two. However, he has never actually made an appearance. It started to remind me of the 1970’s television series, Charlie’s Angels, with John Forsythe phoning in as the never-seen Charlie.

Pip enjoyed giving everyone nicknames, usually based on their occupations or their aspirations.  Her friend and neighbor, Mona, had big dreams of being an actress, but little chance of seeing them come to fruition. Mona is something of a flirt, but you won’t see her “lead anyone on.” It’s just that people (particularly men) jump to do things for her.

In my imagination, the original “It Girl” — Clara Bow plays Mona.

The “things” for Episode-2 required me to write about a ballerina, a fireman, a movie star, and an astronaut. Have I mentioned that I’m a research geek? I had to make sure the word “astronaut” was actually used in the 1920’s. I got conflicting information, but the greater consensus said “no.” However, I learned the term Astronaute was used in France at the time. So Andy Avis is also of French descent.

Andy is a science fiction writer, hence Pip’s nickname for him Andy the Astronaute-man.  Despite the heroic stories he writes, Andy is not the bravest bean in the bunch. Discretion is pos-i-lute-ly the better part of valor with him. To his credit, sometimes Andy overcomes his big fears and takes action. Doesn’t it take a lot more courage to do something when you’re afraid than if you are just naturally brave?

Right away I saw a younger Willie Garson as my Andy.  (You might know him from “White Collar” or Sex and the City.) I could see the friendship between him and Mona. Although unlike Stanford, Andy hopes the friendship will become a romance. On the other hand, Andy could easily look like Buster Keaton with those sad eyes.

Although it is not truly a character the Ca’d’Zan mansion is an important part of this story. Learning about this amazing place was so much fun that I had to include it here. I hope you’ll do some research of your own about the home of John and Mabel Ringling.

The Ringlings don’t play huge roles in the story, but they were important nonetheless.  Pip and company are invited onboard a yacht that they don’t at first realize belongs to John Ringling. Countess Bepa is old friends with Mabel Ringling.  The entire gang ends up at fabulous Ca’d’Zan where the mystery concludes.

Frankie Fabro and His Cousins

Frankie the Fireman and his cousins Flavio, Fedel, and Frediano. First we meet Frankie. He’s taller and a little bigger than his cousins, but all four of the young men look a lot alike. Elder brother Flavio looks out for twins, Fred and Fedel. Pip has a crush on Frankie. Flavio, like most men seems to think Mona is the berries.

Oddly enough I never had an image in my mind of Frankie the Fireman. So he is included here with his look alike cousins. 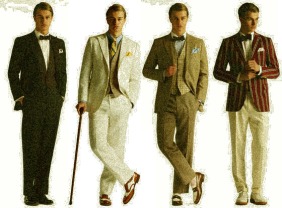 The mysterious white-haired woman… turns out to be not only the grand mother of Boris the Ballerina, but a real life countess. It was after Bepa Babikov came along that I saw a photo of Countess Von Hartenau that was simply the vision of Bepa’s elegance, as well as her fierce determination.  She instantly replaced any other image I had of Bepa.

Retired from the Ballets Russes after a career-ending injury, Boris gives the occasional dance lesson to earn a living. Mona is infatuated with Boris, but also conflicted. She has some ways of thinking to outgrow.  Boris is the strong silent type. His friends have to work at it to get to know him. When I saw a photo of Fred Astaire, in a rather sulky pose, it made me think of Boris Babikov.

I hope you’ve enjoyed this little break from the serial.  Next weekend I’ll be back with…. What’s that? Stop screaming so I can tell what you’re saying. No episode this week? Oh… Well if that’s what you really want.

Let’s get a wiggle on and round out this character recap with Episode-25.

My eyes strayed to the Art Deco pottery jug into which Ringling had casually dropped the bent key.

Had he been a little too offhanded when he did that?  What if his nonchalance was fake?  I shifted my gaze to the circus millionaire and found him looking at me.  I knew it might be foolish of me, but I couldn’t stop myself from blurting out my thoughts.

Everyone became silent, except for Pear the hedgehog, scrabbling inside his lunch pail carrier.  I turned to Countess Babikov.  By the expression on her face, I knew the direction of my words didn’t give her any comfort.  It was obviously meant to be a distraction when she turned to Mona and indicated the tin lunch pail.

“Dear!  What have you in that box?  I hear a tiny creature moving around.  Is it a kitten?” she asked Mona.

It was a feeble attempt at diverting me and the white-haired woman must have realized that, because she blushed and glanced over at me.  However, I was not diverted.  My mind went to that very eventful night when the

countess was abducted, and later the group of us returned home to find Boris’ place being burglarized.  I remembered the broken vase and speculating that a key might have been hidden inside.  At the time I wondered if Boris had a key to match the bent one that was dropped from the getaway car.  Once again I considered the same idea — and I voiced the thought.

Ringling and the countess looked at each other in a silent exchange.  She drew an unsteady breath and looked up at him from her spot on the beautifully upholstered sofa.  “John, I am more worried than ever for my grandson’s safety.  If these young people can tell us where to find him…  Can you bring him here?  Please?”

I couldn’t imagine anyone refusing the tortured look in the woman’s eyes.  The circus magnate was not immune to her gaze.  Frankie shifted his feet in a nervous way.  Mona sat in silence.  She licked her lips and looked from the fireman to me.  After all, these people were strangers to us.  Boris kept us at arm’s length, but he was our neighbor and a friend, if not a really close one.  We had already concluded that he was in some kind of trouble.  But did these people have his best interest at heart?  And why did my friends seem to want me to make that decision, I wondered in dismay.