I started to say, “Just call me Sybil.” Because I have too much going on — a few different works in progress, and the next serial for this blog simmering on the back burner. However, I don’t think it quite adds up to Sybil’s 16 personalities.  Although with two distinctly different stories actively evolving in my mind, and my real job, you might go ahead and call me Eve…

Suffice to say there are a lot of ideas competing for attention in my head.

Book-2 of Atonement, Tennessee continues to 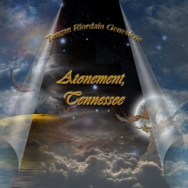 germinate.  That’s appropriate since the title is Atonement in Bloom.  Little seeds to develop the story sprout into ideas.

Though I met the requirements with a draft novel to achieve a “win” with National Novel Writing Month (NaNoWriMo), The Guitar Mancer needs a lot of fleshing out.  (By the way, the introduction to the “rewind” for Episode -23 below is a flashback for me to a previous NaNoWriMo. I must be a glutton for punishment…)

Don’t give up! I will finish both of these novels or it will finish me. Then I can go back to re-working Tatterdemallian: The Electric Zucchini.  And maybe even figure out how to divide The Dead of Winter into two (or three) books.

Applesauce!  Suddenly my brain is tired… So here’s another rewind of the original interactive blog serial, Three Things.

Don’t loose heart my foodie friends! Episode-24 gave us an “ingredient” so look for a recipe at the end of the rewind.  Now, let’s get a wiggle on!

Before I could stop him, Frankie told Countess Babikov about the burglary at Boris’ apartment — I mean office.  I was worried about that episode upsetting her.  The white-haired woman had clearly been abducted and roughed up, so she seemed fragile.  There was that cut and bruise at her temple, plus her expensive sheer silk stockings were badly torn.

However, the look of frailty was momentary.  Countess Babikov got a steely, protective look in her eyes.  I was almost worried about her kidnappers.  She took another sip of the brandy I had gotten for her, but I could tell she was thinking.  You could practically see the wheels turning in her mind.  She blinked as if something had interrupted her thoughts.

“Frankie my dear, would you bring my coat?” she asked pointing to a chair where the coat with the fox collar was draped.

When the fireman handed her the coat she thanked him, then quickly searched through it.  “Ah!  It is still there.  Thank goodness,” she said in a pleased tone as she withdrew a small silver jewelry casket.  She opened it to display a beautiful dress clip, shaped like a butterfly.

She smiled warmly and held it out to the circus magnate.  “I saw this when the Ballets Russes last performed in England.  I could imagine the butterfly in Mable’s rose garden, and I knew she must have it… my dearest friend, Mable.”

The butterfly was made from a lovely blue banded gemstone.  I asked if it was fluorite, but it didn’t really look like any I had ever seen.  In answer Countess Babikov described her visit to Castleton and the shop where she found the dress clip made from a rare stone she called Blue John.

“Jeepers, I almost forgot!” I exclaimed and started fishing in my pocketbook.  When I looked up, I was uncomfortable to find all eyes on me.  I felt a little foolish, but I produced the bent key and grinned.  However, I wasn’t sure to which of them I should give it.  I tried to look at John Ringling and the Countess both when I explained.

“This fell from the getaway car back at the Nickelodeon Theatre when they nabbed you, Countess Babikov.  I think the engraving says Ca’d’Zan,” I told them.

“It’s seen better days, hasn’t it?” commented John Ringling as he took the key and inspected it closely.  “It’s for Ca’d’Zan alright.”

Then he dropped the damaged key into a lovely pottery jug.  The sound made everyone look at the piece.  Leaning closer to look at the pottery Frankie asked, “Is that what they call Art Deco?  The style, I mean?”

Mr. Ringling wore a rather distracted expression, but he answered, “I believe so.  I haven’t heard the term

until just recently.  Mable, my wife, took a shine to this stuff during one of our travels.  The young lady who painted it is called Clarice Cliff.  I think she called that pattern Bizarre.”

“Tell me everything about Boris,” the Countess said imploringly, and changed the subject.  “When he left the Ballets Russes, he had begun acting strangely.  At first I thought it was because of his injury — you know?  That he was depressed because he could dance no longer.  Yet strange men began to come to see him.  I thought I saw one of them, when I started making inquiries here about my grandson.  Then the other men abducted me, making a ransom demand of my most kind friend here, John,” she said with a look of gratitude and a motion to the circus magnate.

“What can be going on to cause these strange events?” she said as if to herself.  The same question nagged me as well.

I’m finally here with another episode of our little 1920’s story.  The characters have been nagging at my thoughts.  I don’t know what I’m going to do with them during November, while I’m trying to write an entire (new) novel in a few short weeks, for National Novel Writing Month (NaNoWriMo)! Maybe I’ll skip the fun part of decorating the post and looking up historic links, because I spend a good deal of time with that.

There’s bound to be some “thing” that pulls me back to the story.  Sometimes a single word conveys so much feeling or imagery.  Flapper is that kind of word.  Wasn’t your mind filled with images the moment you read the word?  Provincial Lady has a talent for thinking of those words.  She supplied three evocative things for today’s post.  As always you can find all the episodes in one place at the Three Things Serial page.

Episode 23 causes Pip to contemplate the unusual events that she and her friends have recently experienced.  Can she put the pieces together?

An expression of warmth and kindness came to the white-haired woman’s face when she looked at Frankie and me.  “I worried that my Boris squandered his talents in some dissolute existence,” she began, her accent becoming heavier.  I had to focus to understand some of her words.  “But if he has friends such as you, then I know that fear is unfounded.”

Countess Babikov seemed to be wilting from her burst of energy.  I poured another splash of brandy into her glass.  Mr. Ringling helped her sit back on the sofa and put her feet up.  I spotted a decanter of water

and used some to wet my handkerchief and then gently cleaned the cut at her temple.

I opened the door to find Mona looking for me.  She held the tin lunch pail that she’d used for a home-away-from-home for Pear.  However, other than the little hedgehog Mona was alone.  “Where’s Flavio?” I asked.

“He was feeling a little rocky, and went back ashore,” she said with an expression that suggested she was pleased with herself for using the term.  “I don’t think he’s a very good sailor, but he’s a sweet guy.”

Frankie gave me a lopsided grin and commented, “Nah, Flavio’s a bonehead.”  I shot the fireman a skeptical look and his grin was unrepentant.  “Okay.  He’s a good bonehead, but he’s still a bonehead.”

“Oh, Pip!” Mona exclaimed, still in the corridor, but walking toward the door.  “You’ll never believe who I heard this yacht belongs to.”

“Pip, dear,” the Countess said with a twinkle in her eyes.  “Do invite your friend inside.”

I heard the circus millionaire inside, cautioning Bepa or Faith — she asked us to call her one or the other, but I wasn’t quite comfortable with that.  Holy Hannah!  The woman was royalty for goodness sakes!  Anyhow, he was worried about her exerting herself after the ordeal of her kidnapping.

A thought struck me.  No one had ever said what the kidnappers wanted with her…  Of course there was the ransom, but I had a strong feeling that money wasn’t everything they were after.  I was also sure it had an awful lot to do with Boris.   I felt like I was working a jigsaw puzzle and some pieces were missing.  I didn’t like that feeling.

You’d think I would have thought of Agatha Christie the minute the Three Things Serial became a 1920’s story.  She created so many memorable characters.  Two of my favorites are not as well known, but they showcase the spirit of the 1920’s for me — Tommy and Tuppence.  The first novel in which they appeared was The Secret Adversary.

At any rate, I didn’t think of Tommy and Tuppence until recently, although they could easily have inspired our little story.  With a nod to Agatha Christie, today’s Three Things come from the opening of that novel:

The two young people greeted each other affectionately, and momentarily blocked the Dover Street Tube exit in doing so.

Now I give you Three Tommy and Tuppence Things.

Frankie had already caught on to the mischievous twinkle in Countess Bepa’s eyes.  Mona would probably faint when she walked in and saw a big cheese like John Ringling — not to mention a for-real countess!  He blocked the door for a second so he would get a good look at her face when she saw the occupants of the cabin.

“Frankie, old thing,” she said.  “I wondered where you’d gotten to.”

The fireman stepped aside and Mona saw the countess.  Even in her disheveled state, right after having been ransomed by dastardly kidnappers, the older woman exuded easy elegance and confidence.  Mona’s face registered recognition, and I knew she was thinking of the night at the Nickelodeon Theatre when we all saw the white-haired woman pulled into a car that careened away.

“Aren’t you the…” Mona began, but then she noticed the owner of the yacht, and she simply stopped, open mouthed.

“Hey, Movie Star, did somebody just bean you?” Frankie asked with a lopsided grin.

The countess chuckled, and even the circus magnate, still worried about his recently kidnapped guest, smiled.  Introductions were made to the astonishment of Mona the movie star.

“I heard you refer to this charming young man as ‘old thing.’  That’s a term I’ve rarely heard since I arrived in this country,” Countess Babikov told the aspiring actress.  “Are you perhaps from England?”

“Oh no,” Mona said with an attractive blush.  “But I did go to school in London for a couple of years.  It was near Dover Street.”

The countess looked shocked.  She turned to Mr. Ringling.  “John… I just remembered.  That is where I first saw those men.  I had just parted company with my Boris at the Dover Street Tube exit.  That is where I saw them!”

Now for the promised recipe! Have you guessed the ingredient?  Of course it is “Bean” from Episode-24.

Tune in again next weekend to see what happens because of the next set of Three Things. Same flapper time, same flapper channel.