Hi there Sheiks and Shebas!  I’m having a hard time coming up with an intro that will “hook” my readers.  Honestly, I don’t mean to complain, but I’ve been battling a migraine on and off for two days.  So All I can think of is…

What did you do this week? Me? I killed a basilisk.

Horsefeathers… I know that sounds geeky and

snotty, but it’s all I have.  Of course I’m talking about my National Novel Writing Month (NaNoWriMo) book, The Guitar Mancer. Well, I promised to give you little updates on my progress. I didn’t know there was going to be a giant, venomous, kill-you-with-a-gaze serpent… but there was, and now it’s conquered. Come on. This is the part where you’re supposed to laugh.

We now move from the 1969/70 setting of The Guitar Mancer to the Roaring 20’s and another rewind set of our first interactive mystery serial, Three Things. There are a few fun links hidden along the way.  Enjoy the ride.

Finally I’m posting another episode of our 1920’s serial.  These three things come from the most “crafty” lady I know — Joye in Albuquerque.

Since I didn’t do a mid-week post, you might need to refresh your memory of the serial.  You can read all the episodes at the Three Things Serial page.

Pip finds interesting things before the group even gets to the gate of the big shindig.  Read on as the mystery deepens…

Flavio bent closer to inspect the bullet hole, which was in the crease where the fender met the body of the car.  “I’m amazed that you spotted it,” he told me.

Frankie looked around uneasily.  One of the chauffeurs stopped his idle polishing of the limousine he drove and looked our way.  “We should get going,” the fireman said, with a significant nod in the guy’s direction.

He took my arm, but I pulled back.  What was that inside the car?  I sighed.  That chauffer was still looking at us.  “Mona, be a doll and distract that mug for a minute, will ya?  Ask him for something for Pear to eat.”

The movie star wriggled over to the first driver, and within seconds the other two were clustered around Mona and the tin lunch pail that housed the little hedgehog.  Flavio looked on with a hint of a green monster lighting his eyes.  I barely controlled the urge to tease him about being jealous.  The chauffeurs seemed to have completely forgotten about the rest of us.

I stealthily opened the car door and pulled out a piece of fabric.  I had to give it a good yank, as it was caught on some metal under the seat.  Then I eased the door closed again.  “What is it?” the Fabro cousins asked in unison. 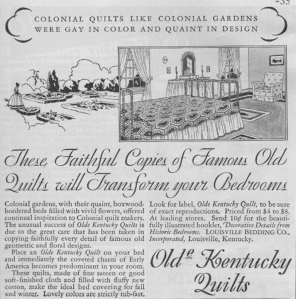 “A tattered quilt,” I began.  “Or rather a torn off piece of one.  I think this is part of a memory square.”

Cotton batting clung to the bit of fabric.  I turned it over and saw part of an embroidered word was cut off at the tear.  It must have been a name.  I looked past the swirly print design and at the white muslin below it.  Frankie touched the print.  “Hey!  It’s Paisley, like you,” he kidded me about my given name.

I turned the bit of quilt this way and that to make out the stitched word.  “B-o-r… could that be part of the letter ‘I’ maybe?” I wondered aloud.  “Holy Hannah!  Boris!”

A reddish brown stain marred the white muslin, and covered more of the embroidery.  The spot was caked and stiff.  Holding it close to my nose I detected a coppery odor.  Blood.

Frankie bent closer to have a look.  “That ain’t from the average quilting bee.”

I’m pleased to tell you that today’s three things are from a “science nerd turned quilter who lives near Bristol UK” – known to bloggers as Spockssister.  For the sake of this blog’s header (which is not at all cooperative with me) the things are sort of abbreviated.  However, in the serial I’m using them as she sent them:  microscope, a hand cranked Singer sewing machine, and a large, stupid, but affectionate dog.

As we headed down to the swank party we were greeted by a large, stupid, but affectionate dog.  He bounded up to us, tail wagging and tongue lolling.  Then he tried to take the torn piece of quilt from my hand.  Mona was quick to take the scrap from me, rolled it up and tucked it into her bag.  Frankie picked up a stick and gave it a strong throw, which sent the dog happily in pursuit of the game.

Flavio watched as Mona put the memory square away.  Like most men, he was mesmerized by the movie star’s every move.  “That reminds me of a quilt my ma’s been working on,” he began.  “She’s been whipping up all sorts of things since she got this hand cranked Singer sewing machine.  Ma called it a ‘double wedding ring’ quilt.  She said she’s going to make one for each of us when we get hitched.”  Flavio shot a quick hopeful look at Mona.  She looked away just as fast.  It wasn’t as awkward as it could have been, I guess.

Mona was a thoroughly modern Millie for sure.  Men threw themselves at her all the time.  She wasn’t above using that, to some extent, but she never took it to extremes.  Like getting the fire department to loan her the truck.  It wasn’t much of a risk with two of the firemen in charge of it.  And she genuinely liked Flavio.  But he didn’t have her heart.  Nope, her career had her heart.  And maybe Boris the ballerina – if she’d stop being so darned conflicted about her feelings for him.

Poor Andy the Astronaute, I couldn’t help thinking.  He was so smitten with Mona.  Andy had real talent as a writer.  Maybe one day that really would bring them together.  Then I remembered Boris again.  Mona’s potential futures were enough to give me a headache, so I put the thoughts away for another time.

When I brought my thoughts back to the present I gasped.  “Applesauce!  This shindig is incredible.”  It was almost a carnival.  It was huge, spread out along the banks of the sound.  There was a band stand, and a wooden floor was set up where dancers did the Charleston.  I saw balloons everywhere.  Tables with white linen and silver were clustered beneath a brightly colored tent.  In other places blankets were spread for picnics.  Everywhere I turned there was something else happening.

Then I saw it.  The yacht.  It was breathtaking.  I knew there was no way it would happen, but I really wanted to see the

inside.  I must have been drooling over it because a flapper stopped and giggled at me.  “Be careful if you go in there, hon.  Dr. Fred might put you under that microscope of his.”

I tried to ask the girl what she meant, but she was already gone in a flash of fringe and sequins.  Then an idea occurred to me.  I clutched my pocketbook and felt it still inside.  The bent key.  I never had been able to make out what was engraved on it.  Was there really somebody on the yacht with a microscope?  Maybe they could read it.

Mary is not just a writer — she’s a brave woman to throw me a word like “Reality.”  There’s no telling where I might go with that!  These three things took me in directions I didn’t expect, but that’s the point of this serial — to let the words all of you supply drive the plot and characters.  By the way, you are most welcome to leave your own three things in comments.  Hint-hint…  🙂

And now, another episode of our little 1920’s story.  Remember you can do catch up reading at the page where the full story lives, the Three Things Serial page.

The flapper in the sequins bounced away, the fringe of her dress dancing as she went.  She turned back, smiled, and waved to someone behind me.  She called, “Hey Doctor Fred!  Come on and Charleston with us!”  Then she looked at me and rolled her eyes.  “Those scientist types…”

Doctor was a title that I associated with dignity and age.  I found it hard to imagine any “Doctor” doing the Charleston.  However, a moment later a man in his thirties, wearing a tuxedo hurried past me.  “Good morning, Miss, and pardon me.  Please make yourself at home,” he said in a Canadian accent and motioned toward the yacht.

How could I resist?

I had never been on any vessel bigger than a fishing boat.  I certainly had never seen inside a luxurious yacht.  I spotted Frankie; then I saw Mona and Flavio.  I called out and motioned for them to come to the yacht.  It was a challenge to my patience, but I waited for them before boarding the gorgeous craft.

When Mona reached me her eyes were as big as saucers.  “Pip, I think that man was Dr. Fredrick Banting.  He won a Nobel Prize, and he’s the youngest to ever win it for Medicine!”

“That’s absolutely ducky,” I said with an impish grin.  “I bet there really is a microscope in there.”

They all looked at me like I was goofy.  I held up my pocketbook, even though they couldn’t know what was inside.  “Remember that key?  Maybe I can see what’s engraved on it with a microscope.”

Sure enough, the yacht was ritzy.  Mona plopped down on a chaise lounge, pouted her lips, and peered up at us from beneath her eyelashes.  She looked for all the world like Clara Bow.

Flavio grinned and bowed over her outstretched hand. “Just remember, toots,” he cautioned.  “This is all a fantasy world. ”

Mona sighed dramatically.  “But I want it to be my reality.”

We now return you to your reality.  Or you’re welcome to stay in this one if you’d rather, because you’re just the cat’s pajamas!