I really do get a lot of satisfaction from writing this blog, and especially from my interactions with all of you, my friends.  Recently Mike and Evelyne, both tagged me to take part in the Meet My Main Character Blog Tour.  If you’ve visited their blogs, then you know how enjoyable they are  — if not, then you’re in for a treat.

Thanks so much, Evelyne and Mike, for including me in this tour!  I hope everyone will check out the other writers they have tagged for the tour as well!  There are a lot of wonderful indie novels out there.

Evelyne Holingue’s young adult novel is Trapped in Paris. Set in contemporary Paris and the Parisian suburbs.  Trapped in Paris is a fast paced action novel on a background of loss. Social and cultural differences separate Cameron and Framboise, yet when the two teenagers find themselves stuck at the airport in Paris, their paths cross, and they become unlikely partners. 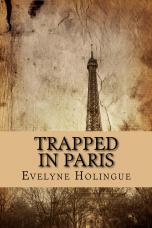 Michael S. Fedison’s The Eye Dancers also appeals to young adults and (not so young, like me) adults alike. It’s a story about friendship, overcoming obstacles, keeping the faith, and believing in possibilities.  The four main characters must learn valuable insights. The most important thing they need to learn is this:  Everything is connected.  Events and people that seem so far away, a universe away, are, in actuality, much closer to us than we ever dared to think.

For this virtual tour, we have to answer a series of questions about the main character in a work-in-progress (WIP).  I have a few of those, but no time to actually do the work for which the “W” stands. However, I’m now focusing my efforts on one WIP — the sequel to Atonement, Tennessee.

You’ll meet many familiar characters in book-2, Atonement in Bloom.  Once again Ralda Lawton is the main character and primary narrator.  Yes, Lilith the calico is back too, and the parts of the story Ralda can’t see are told through the cat’s eyes.  The story is an urban fantasy.  It might not be okay for me to mention it outright, but if you miss the “Sookie” books, now that the well loved series set in a small Louisiana town (with HBO series based on it), has come to an end (wink-nudge-wink), then I think you will like my Atonement series.  There are no vampires (not that I know of), but there are characters inspired by ancient Celtic mythology.

I’m excited to add that yesterday I wrote the prologue! And it is chapter-length.  (Maybe I was channeling Robert Jordan, who wrote thrilling detailed prologues… Though mine can’t compare with his.) While I have lots and lots of notes and some random scenes, this was the first significant writing I’ve gotten to do on the sequel.

Now for the blog tour questions…

1.  What is the name of your character? Is he/she fictional or a historic person?

book in the series, was a National Novel Writing Month (NaNoWriMo) novel.  I designed everything about that story to be something I could do in the single month of NaNoWriMo.  Typically none of my characters are based on real people. But with the need for speed in mind, I let Ralda share some of my outlooks. Plus her profession is similar to mine.  But she isn’t me, I promise. 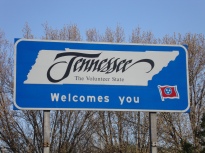 Following the advice “Write what you know,” I wanted a small southern town as the setting.  I chose Tennessee for the state of my fictional town.  (Even making up a fictional town was intended for speed – it wouldn’t need as much research!) But what to name this town? Suddenly “Atonement” popped into my mind as the name for the town.  So my setting for book-2 is also the fictional town, Atonement, Tennessee.

3.  What should we know about him/her?

Hummm…  That’s really hard to say without giving away parts of the story.  And I don’t want to spoil anything for people who have not read the first book, Atonement, Tennessee.

Okay…  Ralda has been hurt badly in the past, and more than once.  She’d like to keep an open mind about things like relationships, but she’s afraid to try.  Besides, she doesn’t think the “pluses” outweigh the “minuses” anyway.  On the other hand, she makes friends quickly and readily.  If she cares about someone, she’s fiercely protective.

She’s highly intuitive, and smart.  Those assets lead her to unravel the mysteries that surround her in her new home, Atonement, Tennessee.

4.  What is the main conflict? What messes up his/her life?

Ultimately, what messes up Ralda’s life (repeatedly) are the supernatural beings that either live in or frequent the strange little town and the old estate house in which she lives (and its grave yard).  The main conflict?  Wouldn’t you know, I haven’t written a synopsis yet.  Let’s see if I can put it into words without giving everything away.

Atonement in Bloom brings some new characters (pictured).  One is Lew.  Lew Lawton-Gyffes shows up in town claiming to be Ralda’s relative.  (She has little family to speak of, so it is a surprise to her.)  Whether or not he really is a distant relation of our heroine, we learn early on that he is Gwydion’s nephew.  Gwydion is one of the supernatural beings, so you can expect some excitement around Lew.

Lew has a purpose in coming to the tiny rural town.  He is looking for a wife.  As with many of my characters, Lew is not simply black and

white.  I like to leave you to make up your own minds about whether some characters are “good” or “bad.”

As in the first story, there are two conflicts.  First the town bursts into bloom in the middle of a winter snow storm.  But then, the plants and trees in Atonement and nearby farms begin to die, inexplicably — a serious problem in an agricultural area. Lew is mostly the cause of the other conflict (or maybe conflicts).

5.  What is the personal goal of the character?

Ralda Lawton just wants a peaceful life in her new town.  She succeeded in getting away from the big city by moving to quaint Atonement, Tennessee in book-1.  However, so far, her new life has been anything but quiet.  How could she know the tiny town rests on a very powerful ley line?  It seems to draw mythological entities like a magnet.

6.  Is there a working title for this novel, and can we read more about it?

Yes, I’ve settled on the title, and I’m pretty sure of my book cover.  Atonement in Bloom.  You can learn more about most of the characters here on my blog.  Using the Categories on the right-hand side of the page click on either “Atonement, Tennessee” or “Character Interviews.” 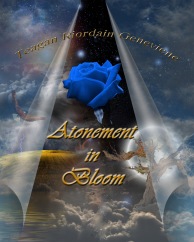 7.  When can we expect the book to be published?

As Pip, from The Three Ingredients would say, Applesauce!  I work full-time, and it is extremely stressful.  Then I spend all my free time on the blog serial.  So that doesn’t leave much time for my novels.  I make neither promises nor predictions.  However, I would very much like to finish and publish it before the calendar year is over.  I’d really like that a lot.  Universe?  Did you hear that Universe? I’m putting it out there…

Now simmer down…  I’m not tagging you

If you’ve looked at this blog tour, you’re expecting my “tags” and links to other great indie books here.  I feel like I’m letting Mike and Evelyne (and myself) down, but nobody I approached wanted to be tagged.  So my part in this charming tour basically ends here and I have to “get off the bus.”

However, I do enjoy promoting others, whether or not I get anything from it. I just feel good, thinking I’ve given someone a chance or a compliment. Since my blog features a culinary mystery serial (The Three Ingredients) I’m sharing some lovely cooking and food related blogs since there was no one to tag.

On the links below you’ll find dozens of delicious dishes to prepare (or if you’re like me to dream about).  And now that you’ve checked out Mike and Evelyne you have some lovely books to read while you wait for those delightful dishes to cook.

Suzanne at A Pug in the Kitchen

Phuong at Dr. Phuong Le Callaway’s Store (Her blog is about leadership, rather than cooking.)

Please visit their sites and while you’re at it, check out some of the wonderful commenters and the great folks who’ve left a “like.”