I gave myself a rule to restrict “Teagan’s Books” to writing and indie publishing related topics. However, with a previous director at work, one of my tasks was writing a motivational message every week. During the past few days one of those messages has repeatedly come to mind.  Maybe, I said to myself, someone needs to hear it.  So I’m making an exception to my rule.

For me, the past eighteen years has been a constant exercise in improving my situation in life.  That has forced me to be constantly ready to tackle obstacles that are all but insurmountable for one person; alone.  I mean things like driving all the way across the country with only my two cats for moral support — cats who, unlike Toonces in the old Saturday Night Live shows, cannot help with the driving!

But I digress.  Here is that message.

Last week I was stuck inside an elevator for a while.  That circumstance made me think of the countless things we all fear.  Many people have one particular fear that holds them back in work and in life – they are afraid of doing something they think they can’t do.  We often hear the terms “fear of failure” or “fear of the unknown,” and I guess those are pretty close to the same thing.

Was there ever a time when you were terrified of doing something, but somehow, you gathered your courage and did it?  No matter how it went, I hope you were proud of yourself for trying.  There is a quote from Eleanor Roosevelt.

“You gain strength, courage, and confidence by every experience in which you really stop to look fear in the face.

You must do the thing which you think you cannot do.” 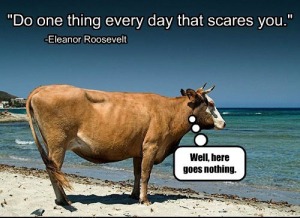 Yes, fear has its value.  It prompts us to protect ourselves in dangerous situations.  However, the wrong kind of fear becomes corrosive.  It eats away at our ability to think clearly, prevents us from trying new things, testing new ideas.

So I ask you, what are the things you think you can’t do?  Make a list of them and look at it.  Now, isn’t there at least one thing on that list that you really, really think you should be trying to do?

Yes, I thought there was.  Are you ready to look fear in the face?