You’ve reached The Armadillo Files… and we’re back!  Thanks for bearing with me while I finished “Dead of Winter.”  Now back to the free story. 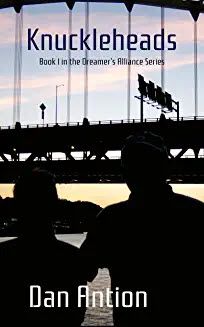 Since Dan Antion just launched his first novel, it felt right that his “three things” helped guide this new episode.  Those things are: Charcoal grill, root beer, and Transistor radio.

Dilly and Fang “landed” in a cave that appears to be in tenth century Bagdad. They ran afoul of Ali Baba’s wicked brother, Cassim.  He’s a greedy guy who might have sold them into slavery, given the chance.  Hmmm… could that have anything to do with the fate of the missing Calutron Girls in the 1940s? It turned out Ali Baba is a woman.  We also met Sesame.

If you need to refresh your memory, you can always find all the past chapters by going to the categories on the right side of the screen.  Click on Armadillo Files.

The woman named Ali Baba didn’t worry me.  Not much anyway.  Although I wasn’t as comfortable with the giantess who guarded the secret entrance at the back of the cave.

Fang slipped into that area while its door-woman wasn’t looking.  I saw him fiddling with something small and rectangular.  Though it was utterly out of place, or rather out of time, I thought he held a transistor radio.

“Ain’t that a bite.  I can’t pick up any channels.  Oh well, didn’t hurt to check.  I sure could use some rock n roll,” he complained before disappearing behind some large crates.

Side-effects! I thought, paying no attention to Fang.

Nobody would answer my question about the side-effects of time travel on humans, and I was beyond frustrated.

I removed the necklace the giantess, Sesame, hung around my neck.  It perturbed me that the watch-like bauble that hung from it was warm to the touch.  Gazing curiously at, I thought there was something odd about it.  Holding up the watch, I squinted in the shadowy cave.

Fang emerged from the hidden area.  Apparently, it held all sorts of “time contraband.”  Whistling a Buddy Holly song, he carried a charcoal grill.  He was babbling about a cookout and asked the strange woman about hotdogs.  She looked at him in dismay at the term.  He assured her that it had nothing to do with canines.

“It says 13 O’clock!” I cried in dismay, examining the watch.  “The face has thirteen numbers on it.  What is this thing?”

“Because the device can only slow the side-effects, it keeps a running count of how much time you have left,” Sesame explained in her ironically shy voice.

My face went white.  My knees got weak.  What did she mean?

“However, it is not exact, you see,” Sesame went on, clearly trying, though unsuccessfully, to calm me.  “It might be thirteen minutes, thirteen hours, days, or weeks, and so on.  One cannot say.”

“Shush, shush.  Dilly don’t be silly.  The watch shows how much time you have before you start to transform,” Fang replied sheepishly.

“Transform!  Transform into what?” I shrieked.

Fang put his hands to cover his sensitive ears.  He cringed.  I heard a rip from his pants, and long, scaly, spatula-shaped pink tail popped out.  I figured that meant he was a lot less calm than he pretended.

“One cannot say,” Sesame replied.  “It is most likely to be a creature from your own home world and your home time.”

“Oh no, Sesame.  That’s really going to upset her,” Fang moaned.  “Dilly, please don’t yell again.  There’s less than a one in a million chance that anyone would transform into an alien creature from another planet.  Or anything weird from mythology.  And it’s not likely that you would become a bird, and especially not a fish or anything else that doesn’t breathe air. Well.. it’s not impossible, but it’s unlikely.”

Somehow neither of their explanations made me feel any better.  Fang probably added the part about becoming a fish because I was standing there with my mouth open, like a fish on dry land.

“One would usually transform into an animal for which they had a strong affinity,” Sesame added gently, but she noticed that I still didn’t grasp the situation.  “Is there an animal with behavioral traits or personality that is similar to yours?” she asked, looking first at me and then at Fang.

“Well… her hair usually sticks out in all directions,” Fang began.  “No offence, Dilly.  Kind of like one of those ‘fancy’ chickens.  Oh, calm down!  At least you won’t turn in to a Venus flytrap.  Since you’re a botanist, your affinity is for plants, not animals.  Your creature might be completely random.”

Horrified, I gasped at the image of myself uncontrollably bocking and scratching in the dirt like a chicken with bad hair.

My hands went slack.  When I let go of the gizmo, it swung freely on the chain.  I heard a scrambling sound.  Before I had any idea of what was about to happen, something yanked the necklace from my hand.  I got a glimpse of something small, elongated, and furry.

“Tatu!  My habibi, you must catch that thief!” Sesame exclaimed.

“Me?  Your legs are twice as long as mine.  You could cover ground faster,” Fang responded, but started running after whatever it was.

Sesame heaved the huge rock back into place to cover the opening to the secret part of the cave.  In her demure voice, she advised me to stay where I was.  Then with long, heavy strides she followed Fang.  I saw her catch up to him at the mouth of the cave.  Fang went in one direction to search, and she went in the other.

I sank down on a crate, trying to absorb the idea that I might unwillingly transform to some unknown animal.  Not to mention that it might happen in thirteen minutes… or maybe thirteen months.

My elbow touched something cold.  Beside the small charcoal grill, Fang had left three bottles of root beer and a bottle opener.  I popped the top on one and drank deeply.

In the shadows, several small shapes approached.  As they came closer, I realized they were ferrets.  Bolder than the rest, two of them came up to me and sniffed.  Then they moved to investigate the rock.  They made small annoyed sounds upon finding the secret part closed.

After a moment, the ferrets ignored me and went about their business.  Some played, chasing one another.  Others curled up here and there for naps.

The little animal that swiped the necklace must have been one of the ferrets, I thought and watched carefully to see if any of them carried something shiny.  However, I didn’t see the bauble.

Abruptly a sardonic thought registered with me.

Hmmm… We still don’t know about those possible side-effects for Dilly.  Also, of course, it looks like Fang is likely to land himself in trouble again.  Tune in next time.  Hugs on the wing!

Dead of Winter has now concluded with Journey 14, The Veil.  It is now available!

59 thoughts on “The Armadillo Files, Episode 28, What will I be? — Featuring Dan Antion”