Welcome back to the steampunk riverboat, my chuckaboos!

Most of you will recall this serial is a rewrite of a novel I wrote in 2016.  I wasn’t satisfied with it, so I’m adding to it via this serial.  During National Novel Writing Month, I posted a few chapters that did not get a rewrite.  However, today’s chapter is all new material.

I only used one random reader thing —  Locusts from Jacquie Biggar.  I hope you’ll take a moment to visit her blog.

This time preparations are starting for Émeraude’s sweet sixteen party.

Thanks to Dan Antion and Faith Antion for the use of their photos.

There it was again — that sooty, smudgy cloud that was never quite where a cloud should be.  I could have sworn it followed the Delta Pearl.  Although, that couldn’t be, because sometimes it was ahead of the riverboat.

The Dealer knew something about it, I was certain.  However, he was keeping his cards close to his chest.  The idea that Jaspe was being secretive bothered me even more than that cloud.

Worse, if Jaspe wouldn’t discuss it with me, then none of the senior staff were likely to talk about it either.

I stood high upon the hurricane deck and stared at the sooty blotch that hung in the sky above the riverbank.  An unexpected voice at my ear caused me to jump.

“A penny for your thoughts,” Obsidian Durango said into my ear.  “Ha!  Émeraude, you look like you’ve seen a ghost.  “Honestly, I didn’t mean to scare you.  But if I’d known it would get that much of a reaction, I would have goosed you too,” the Cadette added amid chortles.

“Ouch!” he exclaimed when I punched his arm, but he was still laughing.

“Sid, you’re such a comedian,” I quipped, drawing back, getting my fist ready to make contact with his other arm.  “You’re a regular wag.  What are you doing up here anyway?”

He nodded toward the broad red and white stripped awning that was rolled up and waiting to be hung. 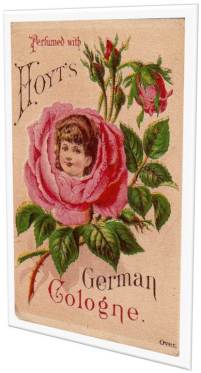 “Making sure the fittings are in place to stretch the shade awing across this area,” he commented.  “The Cook is snaring every pair of ‘idle hands’ she can catch to help with the decorations for your sweet sixteen party.  This seemed like a good chore to appoint myself, before she could have me tying bows or arranging flowers.”

The Cadette was hiding something behind his back.  When I leaned to see what it was, he brought out a single hot pink rose with a ribbon bow.

“Aw thank you, Sid,” I said sweetly to throw him off balance.  “You took that from the Cook’s decorations, didn’t you?” I told him as I sniffed the rose.

Knowing my penchant for the color green, Agate had been searching for green flowers ― not the easiest task.  I overheard the Dealer recommend hot pink roses.  He said they were used to show appreciation and recognition.

Part of me was excited about the party.  I wondered if the coming of age event would help the senior staff see me as an adult.  Even so, I felt shy about all the attention.  My life on the riverboat was somewhat isolated.  Agate wanted the party to be open to all the passengers.  To my astonishment, the Captain agreed.

I gave an angst laden sigh.  My gaze returned to the riverbank and that smudgy cloud.

“Don’t despair, Émeraude.  The party will be bang up to the elephant, even without my expert talents used in the decorations,” Sid promised.

He pretended to take offence when I snorted.

“This sweet sixteen thing will be quite the soiree.  The Dealer says they’re popular in Europe.  It sounds like the Quinceañras my sisters had when they turned fifteen,” Obsidian went on, but I was too preoccupied to listen.

“What do you make of that dark cloud over there, Sid?” I asked.

“Well, I don’t think it will rain out your birthday party,” he said with just enough puzzlement in his tone to keep me from wanting to throw him overboard.

The Cadette leaned casually against the railing as he looked at the odd cloud.  I could tell by the way he held his mouth that a sarcastic remark was on its way to his lips.  Then abruptly his expression changed.

He looked high overhead where clouds were meant to reside, and then back to the sooty cloud above the shore.  Sid’s brow was furrowed when he turned back to me.

“It doesn’t look like weather, does it?  Could it be that smog stuff they write about in big city newspapers?” he pondered.  “Oh!  I know.  It’s locusts!  It’s a plague of locusts,” he finished with a decisive nod.  “Hey!  Where are you going?”

I raised a hand in exasperation and turned away.  Blue John, the Mate, came out of the pilot house.  He made a broad motion to include both Sid and me.  Onyx, the clockwork owl, sat on his shoulder.  He held a note in his brass beak.

“He’d only give the note to thee, Émeraude.  You know he can be a stubborn one.  Cadette, it looks like the task of hanging that awning is ourn.  Let’s get to it,” Blue John said.

I was glad to see the Mate looking much better than the last time I saw him.  However, there was something rigid about his posture, and his movements were tight.  I could tell he had not had any sort of miraculous recovery from his over-stressed state.

Caution took over me for once.  I wanted to ask Blue what he thought about the cloud.  However, I expected he would be as tight-lipped about it as the Dealer, if he knew anything.  Worse, if he didn’t know, I was afraid the idea might set off another bout of paranoia.  I left my question unasked.  Moreover, I made sure I didn’t look at the cloud.

Onyx leaned forward to give me the note.  Written in Agate’s hand, it said that she needed my help in the tearoom.  That seemed strange.  The tearoom was a cozy dining area.  It wasn’t large enough for any party.  However, my duties on the Delta Pearl included just about anything.

After I read the note, Onyx fluttered up onto the roof of the pilot house.  At least the little busybody wasn’t going to follow me.  He probably thought he should keep an eye on Obsidian.

On my way to my way to the tearoom, two different passengers stopped me to ask for information or directions.  One wanted to know the schedule for shuffleboard games.  The other wanted to know about a misplaced attaché case.  Then I glimpsed the back of Hyacinth Harvey, so I took the long way around to my destination, to avoid her.

When I got to the tearoom it was empty.

“Agate?” I called, but no reply came.

Thump-thump-thud — two lighter bumping noises were followed by a heavier thump.  It was the rhythmic noise I had heard while I chased that brat, Hershel.  So, the only thing I knew about the source of the sound was that the boy had not caused it.

I heard the floor creak.

“About Teagan’s Books” is a button at the top of this page. There you can find information about and purchase links for all my books. Rather than re-list them all here, I’m going to feature one book at a time.

Related to that, I’m also featuring a terrific photo post from Tim Price of Off Center & Not Even.  Tim found this mural and it made me think of Deme and Honeybell, the otherworldly pigs from Atonement, TN.  Click over and visit Tim.