Welcome back to Jazz Age Wednesdays!

WordPress has made blogging so difficult for me that I’m taking the week off — sort of anyhow.  I’m rerunning this short story from 2017.  Unfortunately, because of the WordPress problems, I won’t be able to visit many blogs during this “sort of break.”

In celebration of Halloween two years ago, I wrote 1920s tale about Pip and some of her friends.  I let search engines guide me to three random things to drive this story ― first Google, then Yahoo, then Bing.  I typed in “Halloween,” hit enter, and used the first thing that caught my eye at each.  The three things are:  candy, fields of fear, and children holding hands.

Whether you were around the first time, or it’s new to you, I hope you enjoy it.

Pip in the Fields of Fear

An autumn breeze whistled through the trees as I left the candy store with a white bag of lemon drops.  A young man with a motorized bicycle caught my eye.  I couldn’t see his face, but I knew only one person who had a contraption like that ― Hank Hertz.  He had a passion for all things electronic, especially radios.  He was such a wiz at the stuff that it earned him a place as the youngest officer of the Savannah, Georgia police department.

Hank loaded all sorts of mystifying gadgets into the basket on the bicycle.  He jumped when I walked up behind him and asked what he was doing.  Of course, that made me grin.

“Paisley Idelle Peabody,” Hank grumbled, trying to sound authoratative.  “I might have known.”

“Are you making another radio, Hank?”

“Yes.  No.  Well, not exactly,” he stammered.  “I’m working on something for a charity thing the department is doing for Halloween.  You know how people like to scare themselves this time of year.  They’re going to have something like a haunted house, but it will be outside. I’m going to rig up some radio speakers and make noises to scare people when they get to spooky parts.  I hope it doesn’t rain,” he added with a suspicious look at the sky.

“That sounds like the cat’s meow,” I said encouragingly since Hank always seemed like somebody who could use a little extra praise.

“We’re going to call it Fields of Fear,” Hank enthused.  “The chief owns a farm on the outskirts of town and he said we could use it.”

“I thought he lived over on King street,” I commented.  “It must be nice to have enough mazuma to afford two places.”

Hank made a face and nodded.  Then he looked at all the electronic gadgets and grinned.

Hank and Detective Dabney Daniels built a platform hidden in the branches of a big oak tree.  From there they ran wires for speakers to four different spots that Hank could see from the hiding place.  One speaker was placed behind a skeleton.  When anybody stopped there, either Hank or Dabney would use a deep voice as the skeleton to speak to the people.

Applesauce!  You should have heard the shrieks!  They did the same with a jack o’ lantern sitting on a hay bail and a bed-sheet rigged up like a ghost.  Gaffers and bluenose old ladies were like children holding hands.  They screamed, and then they hollered with laughter.

Granny Phanny and some other women approached the ghost.  The whole thing was worth it to see the look on Phanny Irene Peabody’s face.  (Yes, my grandmother and I have the same initials.) Detective Daniels showed he was an old foggy in the making though, and made me stop laughing so hard.  But when he turned his head, I couldn’t help busting out with another laugh.

Unfortunately, the ghost stopped working not long after it got a scream out of Granny Phanny.  At least we still had the skeleton and the jack o’lantern.

Long about 11:30 that night the coppers decided to call it quits with the shindig.  While Daniels helped Hank lug the radio stuff down from the tree, I started spooling up the wires.

The “ghost” sat in a heap atop a hay bail.  It had been held up better than that.  Maybe the wind was to blame, but I didn’t remember any strong gusts.  Hank caught up with me when I reached it.  He wanted to figure out what went wrong with it before I took the speaker wire.

“Bushwa!” Hank exclaimed, startling me since the expletive was so unlike the mild-mannered kid.  “The wire isn’t connected.”

“Wouldn’t that be why it stopped working?  If the wire came loose,” I offered.

“That’s not what I mean.  The wire’s completely disconnected.  The screw’s been loosened and the wire is all the way away from it,” he explained puzzled.

In the distance I heard the clock at the Independent Presbyterian Church strike midnight.

“The sheet’s got a wire hooked to that tree,” Hank told me as he motioned to the ghost.  “I’ll climb up and get it.”

I gasped.  I could have sworn the crumpled ghost twitched.  Then I saw that the wire at its “head” wasn’t attached to anything else.  I grabbed Hank’s arm and pointed, because the cat had my tongue.

The white sheet moved again.  There wasn’t any doubt about it ― the sheet really did move.  The ghost slowly rose upright.  It reached out to grab Hank.  He shrieked like a banshee.

Hank caught ahold of my elbow and started to run.  However, the ghost had already grabbed me!  I screamed nearly as loudly as Hank.

I tried to run but the ghost had a tight hold.  Detective Dabney Daniels came along and we started yelling for him to help.

“Yeah, just shoot the thing before it kills us!”

“Shoot it?  But ghosts are already dead,” the detective stated with infuriating calm.

The ghost started shaking. I was terrified to think what that could mean. I could feel it quaking because it held me that close to its…  Body?  Did ghosts have bodies?

I screamed again when the ghost cackled with laughter.

Detective Daniels bent double.  Had it attacked him too, through some kind of spectral magic?

Then I realized the copper was bent over with laughter.  The ghost let go of me.  Finally, I caught the cackle and recognized it.

My grandmother threw off the white sheet, still laughing uproariously.

“Pip… If you could just see the look on your face,” she said, gasping for breath between laughs.

Daniels returned to his nonchalant manner.

“The apple, or in this case the pip doesn’t fall very far from the tree,” he remarked.

I hope you enjoyed this little ditty with Pip.

Have you visited author Teri Polen’s Bad Moon Rising event?  Leading up to Halloween, author Teri Polen hosts Bad Moon Rising.  To check out my visit with her, click here.  It’s her yearly celebration of suspense and horror.  Each year more than 30 horror/thriller indie authors are featured throughout the month of October on her blog, Books & Such.  Teri has let me participate several times.  To see an old interview, click here.

Thanks for visiting.  You’re the cat’s pajamas! 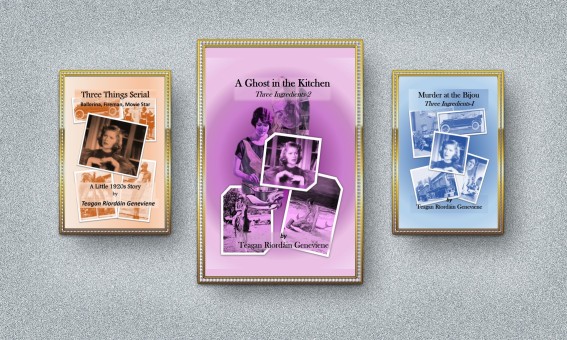 All the Pip books by Teagan Ríordáin Geneviene. Purchase links: The Three Things Serial Story, Murder at the Bijou, and A Ghost in the Kitchen