Happy May Day, everyone!  Do you know what else May is?  It’s Get Caught Reading Month.  I’d like to give you another mini-series this year, but that’s just more than I can do this time.  So I thought I would re-run the one I did last year, featuring blogger pets from everywhere.

I’ve closed comments, but I hope you’ll come along for a fun trip anyway.

Yes, Crystal got caught reading…  If there’s ever been something you wanted to get caught doing, it’s reading!  Did you know that May is officially Get Caught Reading Month?  I didn’t know about it either until Annette Rochelle Aben told me.

Get Caught Reading is a public service campaign launched by the Association of American Publishers to remind people of all ages how much fun it is to read.  So I challenge you to do something, say something, cook something, dig, dance, or draw something that encourages someone to read.

In honor of Get Caught Reading Month, I’m doing a midweek mini-series.  A few elite bloggers (and their pets) band together with one quest — catch the Story Reading Ape reading.  Now, you may say the Ape is known for reading, but our crafty friend is determined to lead the intrepid band on a merry chase.  The adventure is afoot!

How often have I said to you that when you have eliminated the impossible, whatever remains, however improbable, must be the truth?

Sleep, illusive as a feather’s touch, brushed past my wistful eyelids.  The slightest noise could wake me.  The sound seemed far away.  I wondered if a television had been left on, but what show would be filled with faint sounds… of meowing?

Propping up on one elbow, in the puddle of a softly glowing light I saw my cat, Crystal.  She had my cell phone, the source of the multiple meows.  She looked at me guiltily.  The meowing continued.  Don’t misunderstand, I did think it was strange.  I’m not accustomed to my feline fielding phone calls.  I looked at the number, though the feline trio on the other end of the call was clue enough. I hollered into the phone, hoping to be heard by a human.  “Annette!“

The sound of a vase breaking accompanied the scramble of Claudius, Oh Kitty, and Sweeney as they scattered.  Annette was soon at the phone, and we spent a little time trying to figure out why our cats were having a meow-wow in the middle of the night.

“Caught you, Crystal. Next time talk to your friends at a decent hour,” I told my unrepentant cat.

As I spoke the word “caught” it was greeted by a quartet of meowing, from Crystal and Annette’s three.  I asked Annette what she made of that.

“Oh!” she exclaimed.  “It’s Get Caught Reading Month.  But I don’t know why the cats would be talking about it at this hour.”

Suddenly simian shrilling blasted from the phone.  I looked at my cell and saw that the kitties had conferenced in someone else.  It couldn’t be…  Yet another screech said it was so.  The four naughty chimps were party to this monkey business.

Then my phone buzzed with a text from the chimps.  “Time Square,” it said.  “Be there.”

I stammered that I couldn’t possibly. The text buzzed again.

“You have to catch the Ape reading.  He’s somewhere in New York.  At least for now,” it read.

“For heaven’s sake, he’s The Story Reading Ape!  Everyone already knows he reads!”

My cry was answered with the sound of another text.  “He’s been tucked away up in his tree-house for weeks.  Now he insists that you catch him.”

“But why catch him?” I exclaimed.

Annette supplied the answer — since it was Get Caught Reading Month, those naughty chimps had pulled me into some kind of game, probably orchestrated by the Ape himself.  The text buzzed again.

“Your ride is outside.”

Listening closely I heard a soft hum outside my window.  Hesitantly I pulled back the curtain.  I gasped to see a shimmering air ship afloat just beyond my window.  With the magical, alchemical sound of a sharp pop! the pilot leaned out of the dirigible and motioned for me to hurry.  He looked an awful lot like Cornelis Drebbel, but that would be even more impossible than cats and chimps having a midnight phone conversation.

A gangway extended from the airship to my window.  Carefully a redheaded woman walked across.

“Ralda Lawton?  Why aren’t you in Atonement, Tennessee?” I sputtered. 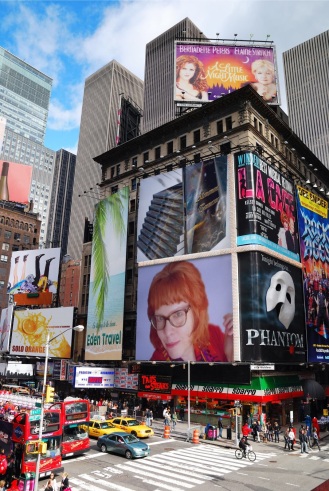 Once on the airship I couldn’t help closing my eyes to yawn.  When I opened my sleepy orbs we were already at Times Square.  It was like magic… I shot a sidelong look at the pilot, but I couldn’t get a clear look at him.

“Ah!  That’s you, so this must be your stop,” the pilot told me, eyebrows flirtatiously bobbing.

I wanted to ask what he meant, but the sound of another pop! silenced me.  Suddenly, to my horror, I stood before a giant image of my own face.

My phone buzzed with a text from Annette asking me to let her know when  I arrived — or maybe it was from her feline crew, at that point I wasn’t sure.  I sent word to Annette and Crystal that I had arrived safely… already.

I couldn’t help gazing at the impossible billboard bearing my book and my bespectacled face.  Movement caught my eye.  I glimpsed something very large and very furry carrying a book.  He bounded around the corner.  I ran to the spot, and looked in every direction, but he was already out of sight.  All I saw was a suspicious looking guy.  Then on the sidewalk I saw a banana.  It had to be the sign of the ape.

Reeling with shock, I whirled at the sound of a horn blowing.  A bright yellow taxi idled beside me.  The driver’s bushy eyebrows looked all too familiar.  Was I fated to see Cornelis Drebbel everywhere I turned?

I felt like a heel.  It was no decent time to call — there would not be a Pug in the Kitchen (or a human) at such an hour.  I was sure to wake them.

However, Suzanne was such a good sport.  She and Percy were ready to jump into the game.  I mentioned the strange billboard on Times Square.  Suzanne wondered if it might be some kind of clue.

“Percy and I will meet you at Madame Tussaud’s Celebrity Wax Museum.  It’s near where you are now,” the blogger-chef promised.

I leaned back in the taxi cab, too gobsmacked to think straight.

It’s hard to tell if we were chasing the Ape, or he was the puppet master, pulling our strings.  Stick around to see who gets caught reading next week!

By the way, it is a work day, so forgive me if I’m slow to answer comments.