My heartfelt thanks to everyone who checked on me yesterday.  Thanks to those who left three things to drive the plot of this serial. And thanks for coming back after that delay!

Yes, yesterday the steam locomotive to the Victorian Era was stalled in Migraineville.  It was also out of the “things” that fuel the plot of this serial.  Author Christoph Fischer was the first to arrive on the scene with three things to get the train back on track.

Christoph is a writer, blogger, reviewer, as well as the author of many compelling novels.  Check out his blog.  My favorite of his books is The Gamblers. However, Christoph has written an impressive number of wonderful books.  You can see all of them together at his Amazon Author Page.

Now that the locomotive is fueled…  All aboard!

Cal Hicks, the amethyst ape, turned somber eyes to the chapel.  He shook his head slowly.  “When the loud harmonic noise of the misused tuner dissipated, I realized there were no sounds whatsoever coming from the church.  To my horror, I found it empty.  Everyone inside had vanished along with the purple people eater,” he said.

“Cornelis!” I whispered to the alchemist.  “That army of chimpanzees back at the Hixon estate.  What if they weren’t trained,” I said.  “What if instead, they were actually translocated?”

Cornelis Drebbel had that look in his eyes — the twinkle-eyed look that never failed to worry me.  That expression would make you think he came from ancient Babylon — powerful, affluent, and downright sinful.  However, he actually wasn’t born until 1572.  I knew that expression meant he thought he was being clever.  While the amethyst ape, Cal Hicks was distracted by Copper’s animated conversation, the alchemist cast a considering gaze his way.

“What are you up to Cornelis Drebbel?” I narrowed my eyes and whispered in a warning tone.

“It’s important that we get back to our own world, don’t you think?” he asked drolly.  “If there was a version of myself here, then that me would have had a laboratory or a workshop of some sort.  I suspect this ape knows where it is.  But how to get him to disclose the information…” the Dutchman pondered.

“Why not just ask him?” I sputtered in exasperation.  “There needn’t be any subterfuge.  He already believes you are, well… you.”

The Dutchman’s mouth twisted to one side.  “Oh, I suppose you’re right.  You do have a way of taking the fun out of things, Felicity,” he said drolly.

“Dear one, please do call me Cal,” he said in a fatherly tone and added a little bow.

That felt the tiniest bit creepy to me, but I smiled and nodded agreeably.  “Would it be possible for you to show us to the Lord of Alchemy’s laboratory?  Cornelis doesn’t like to admit to having lost so much of his memory — temporary though it may be.  I think being among his things would help him remember.  Besides, he dotes on this submarine and would love to repair it,” I said.

The amethyst ape was eager to comply.  I gave Cornelis a sidelong look.  “See,” I told him.  “Simple as that.”

Surprisingly, Absinthe seemed to object.  He fluttered around the alchemist’s head, chirping excitedly.  Remembering how impossibly potent one of his poots could be, it made me nervous to see the Green Fairy so agitated.

“Calm down old boy,” Cornelis said soothingly to Absinthe.  “Everything will be fine.  If I so much as sense something a hair out of the ordinary, I’ll come back here right away.”

As we exited the submarine, Absinthe followed.  He seemed torn between flying protectively around Copper and Cornelis.  The girl turned back and gasped delightedly.

“Look at the submarine!” Copper cried.  “Isn’t it beginning to turn purple?”

Absinthe zipped through the air and quickly circled the submarine.  He came back, with nervous sounding chirping.  He hovered six inches away from the alchemist’s nose, looking quite excitable.  Cornelis looked from Absinthe to the submarine.

“It’s becoming part of the amethyst world,” Copper said in awe.  “If we stay will we turn purple too?” she asked in a way that made it clear she found the prospect of such a transformation delightful.

“We might at that,” Cornelis answered in a wry voice.

I thought he had gone to hide when Absinthe darted back into the submarine.  However, a moment later he emerged with a seabag floating behind him.  The tiny fairy seemed to be handier with levitation than Cornelis.  Absinthe continued to levitate the bag until he reached me.  Then he unceremoniously dropped the bag at my feet.

The seabag came open and out rolled a frightful looking head.  I nearly screamed, but closer inspection showed it to be some kind of hideous mask.  It had two big round goggle eyes and a long snout that ended at a flat circle and a leather strap to hold it to the wearer’s head.

Absinthe levitated the mask over to Copper.  She was quick to understand that he meant her to wear it if needed.  When I saw that the bag also contained several bottles, I thought the Green Fairy was still concerned about this strange environment.  When we first arrived, he had given us bottled water; fearing things of this world would be harmful to us if consumed.

As I returned the bottles to the bag, I discovered a charming silver toothpick holder.  It was shaped like a little gazebo with a domed roof supported by columns.  Within was a crystal bird with wings outstretched.  Tiny holes in the rounded roof held toothpicks. 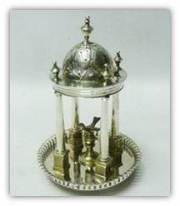 “Why ever would he think we’d need toothpicks?” I murmured, bemused.

Cornelis suddenly appeared at my elbow.  He knew it annoyed me when he did that.  It was always disquieting, and it always entertained him to startle me.  He smirked.

“Absinthe isn’t far off the mark,” Cornelis whispered.  “There is a very real danger that we could become trapped here.  However, we would have to be here for a very long time before that potential became a reality.  This is a measuring device,” he explained, pointing at the toothpick holder.  “If the toothpicks begin to turn purple, it is a warning.”

Seeing my widening eyes, he was quick to elaborate.  “Many of the effects can be mitigated,” he waived away my concern.  “For instance, a little lavender hue is of no real concern.  But if all the toothpicks turn purple we are in serious danger of being unable to return home.  Should the bird turn purple,” he added pointing to the crystal ornament in the center of the gazebo.  “Well, then it is too late,” he finished with a wry twist of his mouth, which suggested that was a real possibility.

The Green Fairy was still agitated, but the purplish color of the undersea vessel seemed to have changed the cause of his worry.  Absinthe fluttered over to Cal Hicks and chirped once.  The ape chuckled, still marveling at the tiny fairy.

“You are the most delightful shade of green,” he said in a mystified tone.

“He wants you to lead us,” Copper translated.

“Ah!  So he does.  This way then,” directed the purple primate as he adjusted his bowler hat and pointed with his amethyst topped walking stick.

After about fifteen minutes of walking we reached a clearing.  In its center was a sprawling building.  It was only one story tall, except for a broad, towering dome in the center.  Cornelis gazed at the facility in childlike wonder.

The sound of clamoring hooves and the clanking of a bell made everyone turn.  A lavender Alpine goat ran out of the building and barreled into Cornelis.  The Dutchman landed on his back with a thud.  The goat sniffed happily at his face.  She made the oddest warbling behh sound.

I had become accustomed to the amethyst ape’s warmhearted chuckle.  So I was surprised to hear him laugh uproariously.  He recovered himself somewhat and turned to me to explain.

“The Lord of Alchemy allowed us to keep a herd of milk goats behind his laboratory.  There was something about the grass there that improved their milk greatly.  I’ve always pondered if that was because this grass has a greenish tone,” Cal Hicks told me, but then shook his head.

“But I digress again,” he apologized.  “Cornelis Drebbel made a pet of this particular goat.  However, I always told him that it was she who thought he was the pet.  She’s quite possessive of him.”

Cornelis clamored to his feet.  The lavender goat gently head-butted the Dutchman and nearly knocked him over again.  She nibbled at his coat sleeve and pant legs, ignoring his attempts to brush her away.  From time to time she uttered that strange warbling behh sound.  It really was funny, and I couldn’t help laughing.

Copper had no compunction about offending anyone.  She wrapped her arms around the goat’s neck, hugging the animal.  The girl laughed so hard she toppled over.  Fortunately the goat seemed to take to her.  The next thing I knew, the large goat had maneuvered Copper onto her back.  Copper sat astride the goat as if she was about to take the goat for a gallop.  The oddest part was that it looked perfectly natural. 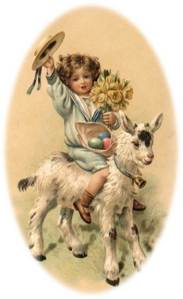 All the laughter was abruptly cut short by a trumpeting screech.  I looked to the amethyst sky from which the sound came, but saw nothing.  Cornelis looked apprehensive.  The ape, Cal Hicks, trembled fearfully.

“Get inside,” Cornelis ordered pointing toward the building that was the laboratory of the version of him that inhabited this world. “Quickly,” he added with a sharp pat to the goat’s rump.  “Hang on tight, Copper!” he called.

The lavender goat bolted toward the laboratory, carrying Copper on her back.

“What was that?” I exclaimed.

Cal Hicks came to himself as we all ran behind the goat.  “I was so sure it was dead,” the amethyst ape said.  “That was the hunting call of the one eyed one horned flying purple people eater!”

What wonders might the laboratory of the alchemist of the amethyst world hold? Will our heroes find a way home? Or will the purple people eater fly in with a savage attack? Come back next time and see what happens to the amethyst ape and the lavender goat — and Copper, the Alchemist, and the Woman in Trousers!

I wondered what kind of recipe I could possibly use for the “three things” that drove this episode.  So I searched the Google countryside.  I found the most delightful blog.  Please visit Claire at Eats from the Streets http://eatsfromthestreets.com/ 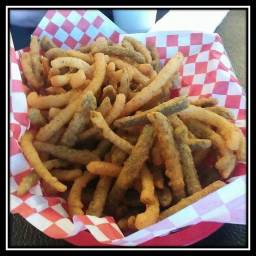 65 thoughts on “Copper, the Alchemist, & the Woman in Trousers: Episode 25”