Hello everyone — I’m so glad to see you again!

At the end of Episode-7 Andy’s fate was unknown. Whether by design or by accident, the ghost-riders had taken him away. Then last weekend Maestro Martino sacrificed something important to him, without knowing whether or not it would return Pip’s friend. However, that segment ended without the ingredients revealing anything about Pip’s dear friend “Andy the Astronaute-man.”

The food-related things for this episode were provided by Suzanne at A Pug in the Kitchen.  She was also kind enough to let me use a recipe for one of those ingredients. I hope you’ll check out her wonderful blog.

Though it seemed like much longer, only moments had passed since Maestro Martino took the hand and shoulder of Caleb the ghost-rider.  Suffused with blinding light, the spirit chef seemed to merge with the cowboy before the ghost-rider disappeared.

My breath caught when I heard the fizz and pop, not unlike a bottle of champagne being uncorked.  I began to associate that sound with the appearance or disappearance of poltergeists.  The sound was immediately followed by something crashing and then the unpleasant noise of puking.  I glanced at the Maestro and saw his grimace. 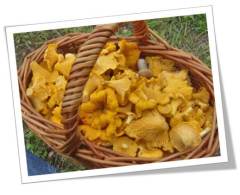 “I haven’t heard such pathetic retching since I took a bumbling apprentice foraging for chanterelle mushrooms.  The poor buffoon gobbled up the wrong species while I wasn’t looking,” the ghost chef said, and he looked like he might sick-up himself.

I hurried around a tall stack of old crates toward the noise.  To my immense relief I found Andy sprawled on what appeared to be an old church pew.  When he saw me he pushed himself up on his elbows and wiped his face with a white handkerchief.

“That was one helluva ride,” my old friend groaned.

I immediately regretted my poor choice of words, but neither Andy nor Maestro seemed to pay any mind.  In fact, the ghost chef wasn’t paying any attention to either of us.  He studied a rotted old crate intently.  Meanwhile Andy looked pale and woozy.  “Maybe you should put your head between your knees,” I said.

“Isn’t that for fainting?” he asked.

“Uh… yeah, I guess so,” I said lamely, and wondered if Andy really expected me to believe he was not about to pass out.

“I’ll be fine,” he mumbled, swaying where he sat.

Startling me, the Maestro drew back his foot, still wearing those odd looking Renaissance era boots, and gave the dilapidated crate a hard kick.  The wood practically disintegrated with the impact.  Several bottles rolled out onto the floor.  The poltergeist chuckled delightedly and scooped up a rolling bottle.  He had it open in a jiffy.

“Here Signore,” Maestro told Andy as he handed him the open bottle.  “This should set you to rights.”

I sat down on the dusty church pew next to Andy Avis.  He took a swig right from the bottle.  Andy made a surprised face, but he swallowed the liquid.  Then he held out the bottle to look at the faded label. 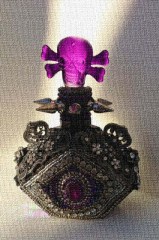 “Everything in this old warehouse, or factory, or whatever it is seems to be ancient,” I commented as I took a closer look at the carved wooden pew.

“The place was both at one time or another,” Andy said.  “So you’re right either way.  Based on what I’ve learned through the records at the courthouse, it might have been a hospital on and off too.  Or at least part of it was.  Probably not this part,” he said sounding like the swig of gin might have gone to his head that fast.  “Maybe somebody held religious services here while they were having a church built or something too,” Andy added and with a little burp he patted the pew and left a handprint in the dust.

Goose bumps covered my arms and the little hairs stood on end.  I looked at the antiquated church pew, at Maestro, and back to Andy.  I remembered the recent day when Andy and I found all those newspapers Granny Fanny had apparently been using to look up something (see Episode-6).  Andy found an old issue with a picture of a lot of young men, including the Binghamton brothers.  I recognized it for the same photo I had seen at the Kingston mansion during the big shindig.  It seemed like Daisy, the spirit girl, wanted me to see something in it.  I knew there was information in that photograph; that Daisy was trying to give me a clue, but she just wasn’t able to be clear. 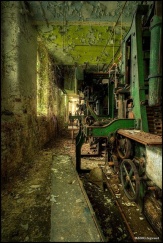 Then Andy had said that he found the name Binghamton in the title research he did for the abandoned building.  A chill went down my spine to match the goose bumps.  I heard the same low whistle cowboy Caleb made at me when he first appeared.  I turned toward the sound.

Multi-colored light glowed softly, just beyond the antique pew.  As I blinked it took the form of a beautiful stained glass window.  Aqua-blue and gold designs cast a soft beam on the three of us.  Then I saw Caleb, bathed in the beautiful light, Stetson hat in hand.

The ghost-rider bowed to us, and bent his head a little lower to the spirit chef.  “I don’t know how I can thank you,” Caleb said, managing to include all of us in the comment.  “But I will keep looking for a way.  If it helps you at all, Daisy knows you’re onto something,” he said causing me to do a double take.

Had the spirit girl managed to encounter the ghost-rider?  Caleb seemed to sense my question and nodded with an unexpectedly shy smile.

“Daisy still doesn’t understand it, but that old picture, this building, and the church window figure together somehow,” the cowboy tried to explain, but his expression said that he didn’t understand the message he relayed.

“How did you show us the stained glass window?” Andy asked in an awed voice.

“Oh, that wasn’t me, Pardner.  No, that was Daisy the Dainty Dish,” Caleb said with a grin, and Daisy’s form flickered beside him. 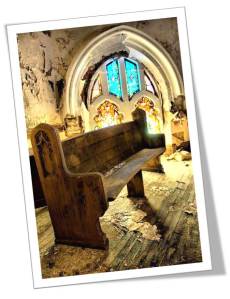 The petite dark haired woman looked fondly up at the cowboy.  Then the image of Daisy blinked out after that brief appearance.  I knew she was terrified of the abandoned building.  I supposed she mustered enough courage to let us know it was her.  Caleb’s impudent grin softened to a gentle expression as he looked at something we could not see, in the spot where Daisy had stood.

“If you’ll excuse me now,” the cowboy said.  “It’s not polite to keep a lady waiting,” he said and faded away.

The image of the stained glass window brightened in a way that seemed insistent, as if the glow refused to be ignroed.  Andy and I both studied it intently trying to memorize the intricate details in the design.

Then I heard a familiar voice in the distance, along with the sound of an automobile’s door slamming.  To my surprise, Maestro abruptly winked out with a fizz and a pop.

“Paisley Idelle Peabody!  Are you in this God forsaken place?” I heard Granny Fanny’s voice, and I cringed at her use of my full name.

“Oh-oh,” Andy muttered, but gave me a mischievous wink.

My grandmother flounced across the warehouse floor to us.  She looked mad enough to spit nails, and I thought I perceived an undercurrent of worry.  She glared all around the factory floor. 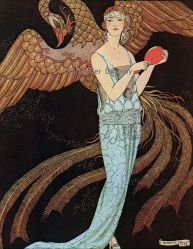 “I take it you two are safe and sound,” Granny said, and it didn’t sound like she was all together pleased with that.  “Although you look downright peaked, Andy,” she pronounced the word as southerners of that era did, peak-ed, and she almost roughly put her hand to his forehead to check his temperature.

Granny was awfully agitated.  I asked how she knew where to find us.  Then she really got mad.  “That dad-blamed ghost you two let into my kitchen!” she spat the words.  “That vulgar so-and-so!  He said he’d teach me to make a trifle, but he’d rather trifle with me.  Then rather than apologize like any gentleman ought to, he started going on about you being in danger.  I managed to drag it out of him about where he was headed. Then I got here as fast as the automobile would take me,” she said in a rush.

Then Granny noticed the supernatural image of the stained glass window just as it faded away.  It left an aqua and gold colored aura in the place where it had been.

“What the devil was that?” Granny Fanny exclaimed wonderingly.

The little pop and fizz sound warned me and I tried to shush the ghost chef before he spoke and made things worse.  But he had a mischievous gleam in his eyes.

“A most ironic choice of words Seniora,” he said with a bow.  “Especially since yon window is part of a church.”

“You!” Granny gasped in a voice that could have frozen the Savanah River. 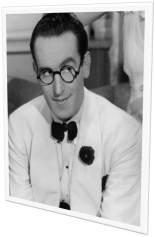 Maestro had the good sense to back away.  However, that had him moving next to Andy.  That probably was not a good thing, since they both had similar baffling expressions on their faces.  What is it with men?

The ghost chef and Andy looked sideways at one another.  “You see young Signore?  She is a spitfire, no?” Martino said to my old friend.  “The woman, she is so exciting when she is angry!”

To my astonishment, Andy’s expression matched the ghost’s and my friend agreed.  However, a mere glance from Granny straightened out Andy Avis.  Maestro didn’t get off so easily though.  Granny Fanny could give a talk fierce enough to make a Baptist preacher green with envy, and brilliant enough to leave a Supreme Court judge feeling like he only had a fifth grade education.  The ghost chef got the full brunt of her eloquent speech.

Maestro Martino hung his head, thoroughly shamed.  Granny Fanny gave a sharp nod of her head.  She said she’d see me and Andy back at the cottage, and told us not to doddle. Then she turned on her heel and practically flounced out of the abandoned factory-warehouse.

Andy watched her go with the oddest series of expressions on his face.  His face held admiration, fear, amazement, and something else about which I surely hoped I was mistaken.  Or at least I’d better be.  I raised one eyebrow at him and that odd part of his expression left in a hurry.

The ghost chef’s eyes were still downcast humbly.  Then I saw him give a sidelong look at Granny’s departing form as she sashayed away.  That lascivious look made me gasp with indignation.  After all — that was my grandmother!  Then the cursed poltergeist winced and made a small uncomfortable noise.

When Maestro looked up, there was a big red cold sore on his lip.

Video:  Better Homes and Gardens – How to Make a Trifle 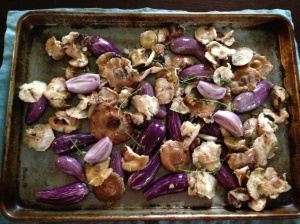