We are drawing closer to the close of our little 1920’s story.  I’m still looking for your feedback on what you’d like to do next.  I definitely want to do something that lets all of you “drive” the story.  There are a couple of “votes” in the comments section of the previous episode.

You can do catch up reading for the other 30 episodes of this serial at the Three Things Serial page.  Without further ado, here is part two of our conclusion.

The sky looked as gloomy as I felt.  What were Frankie and his cousins up to?  And why had he become so quiet and distant?  Maybe if I caught up with them I could find out.  However, before we had gone two feet down the path Andy the Astronaute turned up.  He was babbling something about the trapeze setup and the amazing performers.  He was excited and talking so fast that I could hardly understand him.  Then I heard Countess Bepa’s voice calling to us, asking if we would please come inside for a moment.  Mona clasped my hand and Andy’s hand to pull us inside the gilded mansion, Ca’d’Zan.

I looked back over my shoulder.  The Fabro boys had disappeared, and the wall of rosy vines concealed the entrance to wherever they had gone.  I thought I saw another man moving awkwardly among the bushes, headed that way.  However, I barely got a glimpse of the guy.  The next thing I knew, my friends had pulled me past the pink patina of the stucco and terra cotta exterior, inside beneath a crystal chandelier from the original Waldorf-Astoria Hotel, across white marble floors, and finally into one of the many opulent rooms in the “House of John.”

Mrs. Ringling, or Mable as she insisted we call her, asked us to please sit down for a while and have tea.  A servant brought in a silver tea service as if on cue.  “There’s a chill in the air, and young people looked like you were cold out there,” our hostess told us. 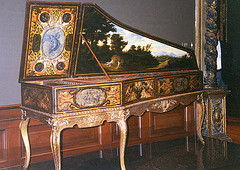 Meanwhile Countess Babikov went on enthusiastically about the ornately decorated French harpsichord that dated back to 1652.  It had somehow escaped destruction during the French Revolution.  I wouldn’t have known what the overelaborate thing was, despite its familiar shape.  So I was surprised to learn it had produced the charming music we had heard moments before.  The instrument was covered in carvings and gold leaf, and painted landscapes.  Everyone has different taste, but I had to admire the craftsmanship and artistry.

As I leaned in to see into the harpsichord, I also took a close look at the intricate landscape painted inside the lid.  Beside the pastoral scene was a rectangular frame with several medallion carvings.  Was that a dragon — like the one on the key?  I bent closer, wishing the sun would come out from behind the clouds and light the room better.

The bent key was still in my purse.  It was too bad I didn’t have it with me so I could compare the designs.  I felt a twinge of guilt.  I had taken the key from the pottery vase where Mr. Ringling casually dropped it.  Although I was the one who found it when it fell from the getaway car, it didn’t really belong to me.  But on the trip from Santa Rosa Sound I had been working at the thing, doing my best to straighten it out. It was just that I needed something to do with my hands; Mona was occupied with her three suitors; Frankie seemed to have forgotten I was alive.  Plus the poor key looked like it would be so pretty if it hadn’t been damaged..

Yes, I was pretty sure the dragon carving inside the harpsichord was the exact same dragon.  In the carving the dragon rested above a shield design.  The shield had a helmet rising above a banner with a cross, which was flanked by three matching banners on either side.  I squinted, and leaned even closer trying to make out the word beneath the shield design.  Grand… something.  Well, it wasn’t a grand piano, it was a harpsichord.  I tilted my head.  Ah… Grand Priory.  Above the shield design I saw words written in a foreign alphabet.  Was it Russian?  “Humph,” I muttered. I wasn’t quite sure what I thought, but my brain felt like rusty clockworks beginning to turn.

Just then somebody goosed me.  I jerked up, banging my head into the harpsichord lid.  “Ouch!” I said, turning to find Frankie behind me.  He was grinning and pleased with himself for startling me.  I rubbed my head, then brushed at my bobbed hair with my fingers, not sure what to make of his change in attitude.  Suddenly he was like the Frankie I knew.  His smile was infectious and I found myself returning it even though I still felt miffed at him for ignoring me for so long.

Flavio was behind him, frowning at Mona.  The brunette was talking quietly with the countess.  Those two had their heads together a lot lately.  She became fast friends with Boris the Ballerina’s grandmother.  That didn’t bode well for Andy’s prospects with Mona.  Flavio didn’t seem to think it was going to help his chances either.

Frankie gave me that sad puppy dog look.  I rolled my eyes and took it for an apology.  “So what have you guys been doing?”

All of a sudden, Frankie stopped smiling.  Flavio stepped closer and gave me that smooth smile he usually saved for Mona the Movie Star.  I had never had anything against Frankie’s older cousin.  He was easily the most dashing of the Fabro brood.  But I didn’t take to him the way Mona did.  “We’ve been up the tower.  Wow! You can see for miles and miles up there,” Flavio said.

His enthusiasm rang flat to my ear.  Especially since I knew that was a lie.  I looked at Frankie.

“Yeah, doll face,” Frankie the Fireman said.  “It would be a great place to watch the sunset.  Maybe I can show it to you some evening,” Frankie suggested, wriggling his eyebrows in a humorous way.

I smiled at him.  I think I smiled.  I sure as shootin’ tried to smile at him.  How could he lie to me like that?  Okay, I told myself, maybe that was true and they had gone to explore the tower first — before they did whatever it was they were up to in the rose garden.  Even as I told myself that, myself knew it wasn’t so.  Oh, applesauce!