You’d think I would have thought of Agatha Christie the minute the Three Things Serial became a 1920’s story.  She created so many memorable characters.  Two of my favorites are not as well known, but they showcase the spirit of the 1920’s for me — Tommy and Tuppence.  The first novel in which they appeared was The Secret Adversary.

At any rate, I didn’t think of Tommy and Tuppence until recently, although they could easily have inspired our little story.  With a nod to Agatha Christie, today’s Three Things come from the opening of that novel:

The two young people greeted each other affectionately, and momentarily blocked the Dover Street Tube exit in doing so.

Now I give you Three Tommy and Tuppence Things.

Frankie had already caught on to the mischievous twinkle in Countess Bepa’s eyes.  Mona would probably faint when she walked in and saw a big cheese like John Ringling — not to mention a for-real countess!  He blocked the door for a second so he would get a good look at her face when she saw the occupants of the cabin.

“Frankie, old thing,” she said.  “I wondered where you’d gotten to.”

The fireman stepped aside and Mona saw the countess.  Even in her disheveled state, right after having been ransomed by dastardly kidnappers, the older woman exuded easy elegance and confidence.  Mona’s face registered recognition, and I knew she was thinking of the night at the Nickelodeon Theatre when we all saw the white-haired woman pulled into a car that careened away.

“Aren’t you the…” Mona began, but then she noticed the owner of the yacht, and she simply stopped, open mouthed.

“Hey, Movie Star, did somebody just bean you?” Frankie asked with a lopsided grin.

The countess chuckled, and even the circus magnate, still worried about his recently kidnapped guest, smiled.  Introductions were made to the astonishment of Mona the movie star. 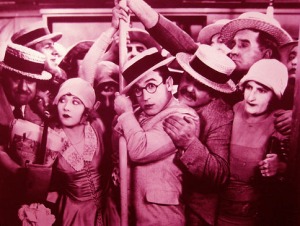 “I heard you refer to this charming young man as ‘old thing.’  That’s a term I’ve rarely heard since I arrived in this country,” Countess Babikov told the aspiring actress.  “Are you perhaps from England?”

“Oh no,” Mona said with an attractive blush.  “But I did go to school in London for a couple of years.  It was near Dover Street.”

The countess looked shocked.  She turned to Mr. Ringling.  “John… I just remembered.  That is where I first saw those men.  I had just parted company with my Boris at the Dover Street Tube exit.  That is where I saw them!”