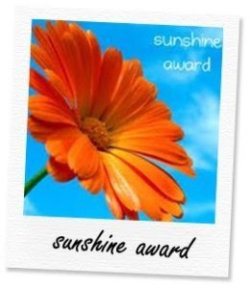 The Sunshine Award is an award given by bloggers to other bloggers. It’s sort of an interview. Because I’m so new to the blogosphere, I don’t know much about such things. However, I do know that I’m very pleased (and actually humbled) to accept the Sunshine Award from Mary J. McCoy-Dressel. This is exciting to me because Mary writes in the Romance genre. I take that to mean that my writing has some cross-over appeal. I hope anyway. You can see more of Mary’s writing at: A Walk With Words.

Since my blog following is so small, I’m taking the liberty of tweaking some of the Sunshine questions to give them more of a writing slant. Here goes!

What inspired you to start blogging?
It’s part of what I jokingly call my “grand experiment.” I decided to try indie (independent) publishing for my 2012 National Novel Writing Month (NaNoWriMo) novel, Atonement, Tennessee. Blogging is one of the things writers have to do for their indie books.

How did you come up with the name of your blog?
Here’s another dose of humility. Teagan’s Books isn’t an imaginative name is it? However, I was so pleased to finish the NaNoWriMo novel — or any book — that the blog name was like a proclamation for me, “I finally did it!”

Is your glass half full or half empty?
I prefer the “cheese” metaphor. There’s a business fable called “Who Moved My Cheese?” by Spencer Johnson. Cheese means satisfaction, contentment, success, etc. Since this post is already long, I’ll let you learn about the cheese on your own (link above). But somebody is always moving my cheese, so I have to find new cheese in new places! It’s a cute story.

If you could go anywhere on a week’s vacation – just to write, where would you go?
Some place with ruins. They make my imagination soar. Places like Angkor Wat (Cambodia), Machu Picchu (Peru), or Palenque (Mexico).

How much time do you spend blogging – in other words, are you one of those lucky people who can dash off a blog post in no time, or like me and take forever on one post to get it just right?
I have a stressful full-time job, so my spare time is committed to writing my books. However, since blogging is a part of indie publishing, I budget some time each week for it. How long it takes to write a blog varies depending on the nature of the blog. This one is longer than I typically write so it’s taking longer. (I think half a page is a good length for one of my update posts. That takes half an hour or less.) If I’m doing a longer post, like a character interview or anything that requires a longer format, I spend a good deal of time.

What TV shows (or favorites) influenced your writing?
When I was a child Star Trek (original) and The Twilight Zone showed me that there was a broader way to look at the world around me. The Twilight Zone in particular influenced my writing. I always liked the bizarre twist on the natural world that I saw in it.

I love that different people can read a book or watch a show and have a completely different take on it. That’s a good reminder to a writer on several levels. Also when novels are transformed into TV shows or movies, they are usually much different from the book. That isn’t always a bad thing. One example is Charlaine Harris’ “Southern Vampire Series” of books, which became the TV series True Blood. The TV show is wildly different from the books, but I like both. Actually the theme song for the show, Bad Things, by Jace Everett, was the first thing to draw me in, not the show or the books. There was something about the lyric, “When you came in the air went out…” It’s a great blues song! (But come on… Alexander Skarsgard? How could I not?)  I tried to give you some pictures, but they kept going to the top of the page… Like i said — new to the blogosphere…