You’ve reached The Armadillo Files.  However, the only craziness going on today is my own stuff, issues, bull shirt, whatever.

For the past few weeks I’ve been trying to (build myself up? psych myself up? prepare? cope?) with a day-to-day task that a normal person wouldn’t think twice about doing.   I don’t want to keep putting it off, so just as I’ve tried for the past two weekends, on Sunday I’ll try again.

Unfortunately, that has drained the focus and will that I would have used to write Fang and Dilly’s next episode.  I’ll be back next weekend and maybe the “random reader things” will show us where the timeline waste flow, aka broken sewer pipe has taken our heroes.

I’m keeping the previous episode below, in case you missed it, or don’t remember.  Have a beautiful weekend. I hope you’ll tune again then.  Hugs on the wing.

The three things that drive this episode are from author and blogger Chris Graham, also known as The Story Reading Ape.  Click over and check out his amazing resources for writers. You’re sure to find an amazing, varied collection of great posts.  His random reader things are broken sewer pipe, paper doll, and non-reflecting standing mirror.

Fang became convinced that the network of tunnels he found in and around the Secret City hold the key to finding the missing Calutron Girls.  You can find all the past chapters by going to the categories on the right side of the screen.  Click on Armadillo Files.

Warning lights flashed.  TROLLEY ceased other tasks to determine the threat-level.  The artificial intelligence checked potential hazards with past interactions.

“TROLLEY, honey…  It’s also urgent that I explore these tunnels,” the operative hissed in reply, as if concerned that he might be heard.  “The truth is down here somewhere.  Or at least something that will let us find the truth.”

The artificial intelligence sent a loud buzz through the communicator.

“Ouch!  What’s the matter with you?  Okay.  I’m on the way!” Pinkerton stated in a sullen voice.

TROLLEY continued gathering and analyzing the new and unexpected data.  Something had changed, and it was bad.

“TROLLEY, what’s the matter?  I don’t understand how that could pose a threat.  It’s only waste, nonessential stuff,” Tatu Pinkerton cried.

“You.  You are the matter, Tatu Pinkerton,” TROLLEY stated.  “You are about to cease to exist.  Proceed to the transport bay immediately.”

Touching an open doorframe, I walked into a workroom.  Static electricity zapped my finger and I yelped.  I gave my hand a hard shake.  Then the hair on my arms stood on end.  That had never happened inside the trolley car looking spaceship.

I went back to the various lists TROLLEY pulled up for people who were associated with the Secret City.  No one seemed to know why the mysterious organization that Fang called “Prime” sent him — and me if by accident, to Oak Ridge, Tennessee in World War II.  I hoped that I might find a name on those lists that might lead me down a productive investigative path.

“How are we supposed to fix anything if we don’t know what it is?” I muttered.

Earlier I noticed Marie Browning on a list that included the Calutron Girls.  She was Harry Morgan’s missing girlfriend.  It included her position as dormitory supervisor/chaperone.  Oddly, I couldn’t spot her name.  I reread the list three times, but Marie’s name was gone.

Rolling my chair back, I stood with the intention of going to the control room.  On my way to the door, the framed photograph Fang had showed me of his friend from basic training caught my eye.  I remembered the picture of a bushbaby and a pink fairy armadillo.  When I picked it up, the image was only of the cute little primate.

A warning claxon distracted me.  I glanced at the photo as I put it back on the shelf.  The armadillo was beside the bush baby.  I touched the frame, and its metal shocked me.  Grumbling I headed onward to the main part of the ship.  When I arrived, I found a very disheveled Tatu Pinkerton already there.

“What is it?” I asked in concern as I entered the control room.  “What was that about ceasing to exist?”

My concern grew into consternation when I saw the data display.

“I didn’t think we were connected to any sewer,” I replied with an arch look at Fang for his excitement over something so mundane.

“We aren’t.  I call the timeline waste flow a ‘time sewer pipe.’  That’s the repository of data about events and people in all times.  It’s things that are disposable, or waste — meaning that altering them will not alter the future or history,” he explained to my bewilderment.

“We better go before she zaps us.  TROLLEY is in a bad mood,” he whispered and hurried me out of the control room.

The modifications TROLLEY made put most of the outer-spacey stuff underground.  That included the transport bay part of the spaceship.

With me right behind him, Fang ran down to the transport bay.  I was frightened by the warning claxon, and confused about what might be happening.

“I don’t understand.  How can the transport bay be used when it’s underground?  Isn’t it blocked by several tons of dirt?  It can’t dock to anything, and we can’t use it to go in or out.  Or can we…?” I asked.

As I spoke, a purple glow started to emanate from the transport bay.  Fang skidded around a corner and into the area.  I slid into him and nearly overturned a huge non-reflecting standing mirror.

“There’s no reflection…” I muttered uncomprehendingly.

I turned toward Fang and was more astonished than ever before.  He sort of flickered before my eyes.  He was there and gone and back again, several times.

“Fang… you’re blinking in and out…” I told him, but he wasn’t paying any attention.

A jukebox was playing One O’Clock Jump by the Count Basie Orchestra.  Abruptly I remembered that it wasn’t really a jukebox.

The odd mirror flashed a green light.  An alert horn blew.  It was different from what I remembered when the spacecraft docked with the Jupiter AM-18 rocket on the day my accidental adventure began.

The other time, there had been a honking a beep-boop sound like a clown horn.  The new sound was reversed to a boop-beep. 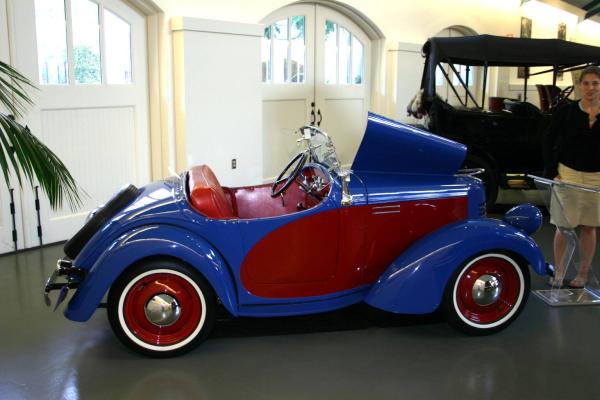 “TROLLEY, your request is processed.  Ready to initiate transport of the physical support auxiliary pilots,” came an unseen voice.

The strange mirror vibrated.  A series of honks and flashing lights came from it.  Then an image took form.  Gob-smacked, I watched a red and blue roadster roll out of the mirror and into the transport bay.

In the car’s seat were the two cats I had seen on that first day.  Peggy Sue was the driver’s seat, and the intern pilot Frances sat beside her.  Peggy Sue meowed and swished her tail, thumping the door of the American Bantam automobile as she got out of the car.  The kitten pounced out next.

“Quick! Dilly, jump over there and use the convergence alignment system,” Fang yelled, waving his arm at a machine that looked like a jukebox.  “There’s no time.  Just press a button!” he shouted at my confused hesitation.

Sounds whirred from inside the jukebox-looking machine.  An instant later the numbers on its screen started moving.  Peggy Sue looked at Fang and gave disdainful meow.

Peggy Sue growled as she got back into the car.  Fang jumped into the seat beside the ginger cat.  Frances hopped onto the back of the roadster and meowed at me.  Her tail gave a frustrated slash.  I climbed onto the car beside the kitten.

“Holy boogie woogie!  Hang on tight, Dilly!  This will be a bumpy ride.  We’re going backwards!” Fang yelled, and his hat was knocked off when the car started to spin.

We were engulfed by the sounds of One O’Clock Jump and purple lights.  My stomach felt like it was folding inward.  A thought flashed through my mind that we were being crumpled like a discarded paper doll.

I doubt that Fang will give up on those tunnels… That is, if he doesn’t vanish from existence… Holy Boogie Woogie indeed. Tune in for more next weekend.  Hugs on the wing!

The history, particularly military aspects of this story probably make it difficult… However, this story isn’t really about religion or politics. So, please remember that this is my sanctuary — a place for all of us to be safe and away from political and religious commentary.  Kindly keep that in mind with your comments.