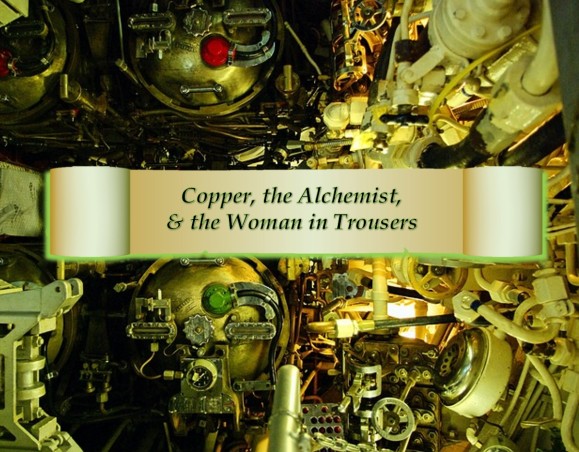 When I wrote this episode back in 2015, I was working on a novel called The Guitar Mancer.  Later I even tried to serialize it here as a means of finishing it. The feedback of readers back then brought an unexpected change to the story.  It was almost complete, but with my job, I still wasn’t able to write “the end.”

Special thanks to Lavinia Ross, who I think loves that story more than anyone else does. “Time keeps rolling on,” as she sings in one of her songs, yet she continues to encourage me to finish that novel.  Hopefully, once I get moved and settled into my new digs, I will do that soon.  Here’s a beautiful sample of Lavinia’s music.

Yes indeed, time keeps rolling on, and yes, I said I’m finally moving.  Can one woman, alone, except for a cat, and with severe agoraphobia manage to relocate across 2,000 miles?  It sounds like a comedy to some.  However, I assure you that for me, it’s a horror story.

Onward…   The three things that propelled the #steampunk submarine in this episode are from an author who is a wonderful supporter of this blog and of my writing — Olga Núñez Miret.  She’s multi-talented, and one of those talents is picking terrific “things.”

Chapter 29.   Felicity figured out at least part of the mystery of the “trained” chimpanzees, but we still don’t know who was using them.

Chapter 30.  Cal Hicks, the ape version of Calvin Hixon, showed our heroes to the laboratory of the purple world’s Cornelis Drebbel.  Just before they went inside, the bloodcurdling hunting call of the one eyed one horned flying purple people eater was heard.  They ran to the laboratory to hide.

Her usually rosy cheeks were pale.

She must have gotten that ridiculous phrase from Cornelis.  I gave the Dutchman a threatening look for teaching the child slang.

The one eyed one horned flying purple people eater roared a terrible screech a moment before, though the creature was not within our sight.  I thought all the excitement must be too much for the girl.  Copper, Corneils, Cal Hicks, and I hurriedly hid from the beast in the huge laboratory that belonged to the amethyst world’s duplicate of Cornelis Drebbel.

Copper got down from the lavender alpine goat that had playfully carried her into the building.  She really did seem unsteady.  Absinthe had been concerned about us consuming the water of this strange place.  I wondered if something she ate or drank at tea disagreed with her.

Frantic cries from outside caused Cal Hicks to dash to the door.  When he opened the door, the violet complected chimpanzee housekeeper rushed inside.  She was in a terrible state, having heard the roar of the flying beast.  She sank to a stool that was nearby.

“Viola!  Whatever brings you out here?  Were you hurt?  Did you see the beast?” Cal Hicks asked in a single breath.

The housekeeper shook violently.  I stooped down to see if she was hurt or unwell.  Cornelis looked over my shoulder at her.  The alchemist seemed to think she was unharmed.  He made a flirtatious comment and wriggled his bushy eyebrows.  She gave a tittering laugh, seeming to recover herself.

“Well dash my wig,” Cornelis murmured so that only I could hear.  “She’s got one and a peppermint drop.”

“What?” I began, annoyed by the Dutchman’s excessive use of slang.

Then I noticed that she had a glass eye.  Of course, the eye was purple.  It was also the first time I realized that she must be elderly.  There were broad strands of pale lavender in her reddish-purple hair.  It was not until that moment that it occurred to me that those pastel streaks would be the same as gray hair in our world.

Cal Hicks turned to us and described how the purple people eater had attacked the village where Viola grew up.  She had been among the casualties.  He discretely indicated that her eye had been one of her wounds.  It was no wonder just hearing the creature frightened her to such an extent.

The amethyst ape seemed to know his way around the laboratory quite well.  I thought he must have worked closely with the purple version of Cornelis Drebbel.  He went directly to a table that held many intriguing devices.  Cal opened a drawer and removed an intricately designed silver vinaigrette.  An invigorating scent drifted over to me when he took the vinaigrette to Viola.  The aroma seemed to revive her.

“No, not precisely.  Rather than ammonium, it’s a restorative herb,” Cal explained.

Assured that Viola was only over-excited and not injured, I stood up again.  As I moved, I felt suddenly lightheaded.  There was also an odd hollow feeling at my heart.  My ears were ringing.  I closed my eyes, placed my hand to my solar plexus and took deep breaths.  When I looked up, I noticed Copper sitting on the floor, the lavender goat nuzzling at her hair affectionately.

I tottered a little as I stood.  Viola handed me the vinaigrette and patted my arm in a grandmotherly way, but I wasn’t experiencing the vapors as she had.  Whatever I was experiencing, it was not from the emotional response that upset the housekeeper.  She nodded, encouraging me to inhale the scent.  I found that it actually did help.  I took it over to Copper, suspecting that whatever had overcome me was also the cause of her discomfort.

“Viola, you must have run to catch up with us,” Cal said.  “Whatever was so important?”

“It’s the family.  They’ve returned.  I wanted to make sure they got to meet your extraordinary guests, but I wanted it to be a surprise for them.  So, I hurried here, only telling them that I was going to fetch you,” Viola explained.  “Then I heard that horrid beast.  I’ll never forget that awful day!” she cried, tears leaking from her good eye.  “I ran the rest of the way, fearing for your safety — for all of you.”

When Viola uttered the word “family” Cornelis paled.  He looked from me to Copper.

“You’re not feeling well,” he said and it was a statement not a question.  “They are too close,” he muttered worriedly.

“Who do you mean?” I asked unsteadily.

The dizziness was making it hard for me to think.

“Your doppelgängers!  They are too close.  That’s why you feel ill.  A hollow feeling?  Dizzy, ears ringing?  Am I right?” Cornelis demanded and I nodded apprehensively.  “You must not get any closer to your doubles from this world!” he said, including both Copper and me. 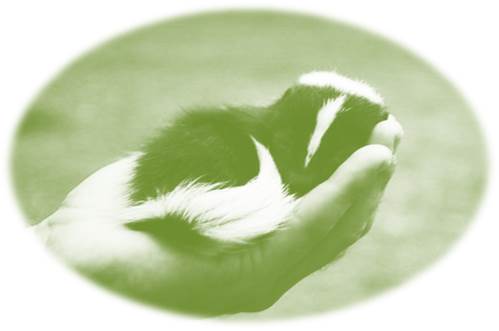 At the excitable tones from Cornelis, Absinthe poked his head up from the alchemist’s jacket pocket.  The tiny fairy stretched his wings and then fluttered to a long worktable that was covered with charts, maps and scientific looking implements.  The Green Fairy inspected the maps, and drawings carefully.  He was just as thorough when he began to examine the contrivances scattered across the table.

He was also remarkably silent.  Though I’d never heard him utter an actual word, the tiny skunk-looking fairy usually muttered, chirped, or grunted most of the time — especially if he was intrigued by something.  However, Absinthe seemed quite serious as he investigated the strange implements on the long table.

He stopped abruptly when he came to a gleaming brass sextant.  It was beautifully decorated with amethyst cabochons.  The navigation instrument was supported by two exquisitely formed gold mermen.  The apparatus sat on a wooden base of purple streaked mahogany.

Absinthe checked the sextant closely, finally muttering very quietly.  However, he still didn’t seem to be himself.  For a moment I wondered if he had a doppelgänger nearby as well.  Then the Green Fairy sighed resignedly.  He looked up at Cornelis and chirped something that the alchemist appeared to understand.  They exchanged a sad look.

The Dutchman moved to examine the sextant.  He muttered in much the same manner as Absinthe.  Finally he nodded.

“Yes.  This should do the trick,” Cornelis said with a decisive nod.

“Can you take care of the err… the Purple Fairy?” Cornelis asked the tiny Green Fairy, and Absinthe nodded, again with that sad resigned attitude.

The grave tone in the alchemist’s voice puzzled me.  I wondered what the skunk-looking creature would do.  Then with a sharp pop Absinthe disappeared.

“What Purple Fairy?” I wanted to know.

The amethyst ape seemed to grasp the fact that was eluding my dizzy noggin.  I struggled to catch up to their thinking, but I felt so woozy.  I vaguely remembered the amethyst ape calling the purple people eater a fae — a fairy.

Viola echoed Cal’s sudden inhalation, putting a hand to her mouth.  “No.  You can’t mean that very small green creature is going out to confront the giant one eyed one horned flying purple people eater!” the violet chimpanzee housekeeper exclaimed.  “Why the poor little thing won’t last a minute.  Please! Can’t you call him back?”

Vinaigrette.  If one wasn’t paying attention, a kind of salad dressing might have been expected.  No, this is vinaigrette.  That is a small container used for holding various aromatic substances, usually dissolved in vinegar.  Think of it as a decorative holder for smelling salts.  A vinaigrette often took the form of a tiny hinged silver box.  A little piece of sponge, soaked in the vinegar mixture, was contained beneath a grill or perforated cover.

Dash my wig:  Exclamation of dismay.  “Dash my wig!  Nothing good will come of that.”

One and a peppermint drop:  When a person has only one eye.

So, the one eyed one horned flying purple people eater is actually a fairy!  Could tiny Absinthe really intend to confront the gigantic beast?  Be at the steampunk submarine port next time, to find out what happens when Chartreuse, and Salmon Koulibiac drive the chapter of Copper, the Alchemist, and the Woman in Trousers!

My chuckaboos, it’s sure to be an adventure, and I’m not trying to sell you a dog! 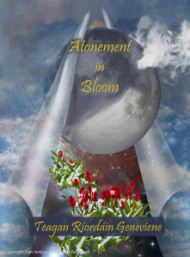 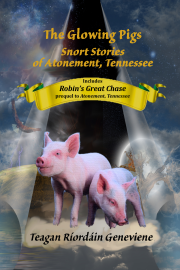 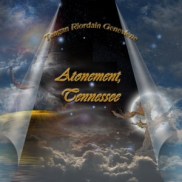 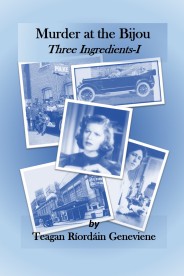 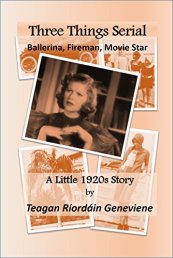