In my novella, The Three Things Serial – a Little 1920s Story, Pip dubs one of her friends “the astronaut man.”  That character is Andy Avis and he writes science fiction stories (hence Pip’s nickname for him).  He happens to have a gigantic crush on Mona. 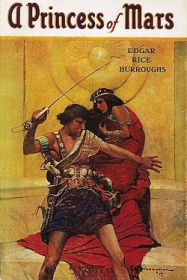 In the novella, Andy is working on a re-imagining of A Princess of Mars.  That is a science fantasy novel by Edgar Rice Burroughs.  Andy would cast Mona in the titular part as Dejah Thoris.

Now, that is not the focus of the novella — it is a very small aspect of the story.  However, I thought it would be fun to let you know more about it.  Science Fiction was coming into its own in the Jazz Age with silent films.

Edgar Rice Burroughs, of course, became famous before the 1920s.  He published A Princess of Mars in 1912.  If you are interested, you can get the book free at Project Gutenberg.  YouTube boasts several offerings of the entire seven hour audio book as well.

I can imagine Pip having all kinds of crazy dreams after reading Andy’s screenplay.

The red and green Martian armies likely battled through Pip’s slumber.  She might have drifted from the Edgar Rice Burroughs vision of Mars to become the Queen of Space in “Aelita, Queen of Mars” and fall in love  with an earth man (who probably looked a lot like Frankie).

Or she might have dreamed of going to a futuristic city with all her friends, Andy, Mona, Boris, and Frankie. “Just Imagine” how they might have envisioned the year 1980.  (No, this video is not from the 20s, but it is from 1930. Full movie.)

They sort of missed the mark there, but I guess that depends on how you look at it.  However, I continue to be intrigued by the number of modern ideas that existed in Pip’s day.

They didn’t have concession stands inside theaters back then, but there was likely a snack bar or cafe next door.  Some movie houses allowed vendors to hawk popcorn or peanuts in the aisles.  Horsefeathers, they probably munched on Cracker Jacks!

Here’s a recipe for Cracker Jacks from Add a Pinch, in case you don’t have a box handy.

Thanks for taking this little jaunt through present-future-past with me.  Mega hugs!