Hey, Sheiks and Shebas.  Welcome back to Jazz Age Wednesdays.

My “partner in crime” (Rob Goldstein) did the video above.  I’m using as a review of last week’s episode.  I’m happy to be able to feature more of the artwork of Rob Goldstein.

Update:  Here’s a fun related post that Rob did over at his blog, “10 Everyday Items Invented in the 1920s* — click over and enjoy.

Today we have Chapter 4 of the Roaring Twenties fantasy series, Hullaba Lulu.  The “dieselpunk*” aspect of the story is beginning to show in this episode.  The “three things” Rob sent for this chapter were downright educational.  Some of the “things” take a bit more writing for me to work into the story than others.  So please bear with me for this somewhat longer episode.

Today’s chapter picks up where Chapter 3 left off, with Lulu in her “secret place,” the abandoned subway station.  The Ouija board spelled out nonsense letters.  She thought she was alone until…

Suddenly, I felt cool fingers touch my shoulder.  I jumped backward and screamed.

My elbow hit one of the dead soldiers lined up on the counter.  As my scream echoed through the abandoned subway station the empty beer bottle toppled with a domino effect.  The entire row went down, rolling and clattering.  Several fell to the floor, but astonishingly none of them broke.  I wondered if the coat of dust on the floor was that thick.

Maybe it was, because a little cloud went up and I sneezed loudly.  As I wiped my nose on my sleeve I looked up at the owner of the cool fingers that had startled me.

For a moment I wondered how the mysterious man had gotten into my secret subway station.  Then I realized that I had not locked the door behind me.

“Your rouge needs blending,” he commented.

Once again, he looked at me as if he had stumbled upon a new species.  It made me wonder if I had a booger in my nostril.  I touched a knuckle to my nose uncomfortably and glanced around for a mirror.

I noticed Valentino held a red leather-bound volume.  It looked like some kind of logbook.  He casually set it on the counter near the Ouija board.  He put his hand to my cheek.  Using his thumb, he rubbed the raspberry colored cosmetic a few times.

“So, what’s that?” I inquired about the book.

Lifting the red cover, I saw hand written notes and illustrations.  Valentino laid his hand on the book cover, closing it.

“The pictures in it are unusual.  Did you draw them too?”

“Yes, Lulu.  I got the idea from Carl Jung.  It’s sort of a travelogue.  It wouldn’t make sense to anyone other than myself,” he replied.

I looked up at his face, evaluating his expression.  Brooksy, a classy dresser in that tuxedo, Valentino was suavely calm.  Maybe too cool.  It made me want to poke at the façade, get a rise out of him.  I wondered what would annoy him.

Valentino had a charisma that was hard to describe.  I didn’t want to be attracted to him for the simple reason that my friends acted foolishly giddy over him.  I figured he had that effect on most women.  Maybe on men too, based on the way that journalist, Tom Driberg had gazed at him.

So focused was I on Valentino that I had not noticed my grandfather enter the room.  I was almost as startled to see Gramps as I had been when Valentino came up behind me.  I thought of the brief stare-down they had outside the speakeasy the night before.

The atmosphere around the two men seemed heavy.  It reminded me of ectoplasm.  I felt I would’ve needed a knife to cut through the gauzy membrane of it.

Then again, maybe it actually is ectoplasm, I thought.

Gradually a faint aura enveloped the two men.  It trailed away from them, becoming thicker, more visible as it stretched back to the Ouija board.  The planchette raced back and forth across the wooden board.  Apparently, I was the only one who noticed.

Gramps swallowed hard and his eyes were tight as he fixed Valentino with a cold stare.  That was the second time I had seen Gramps encounter the enigmatic man.  Both times my grandfather’s intensity, his expressions and manner befuddled me.

“So that’s what brought you back?  That old Ouija board?  I guess coming back to get something is not as cold hearted as returning on a whim.  But it would have been better if you hadn’t come back at all,” Gramps told him in a level tone.

The red leather book flew open and the planchette jumped from the Ouija board to the book.  I hurried to look at the pages before Valentino could get a chance to close it again.

The left-side page was filled with words written in elaborate script.  The hand was neat but difficult to read through the gauzy nimbus.  I wanted to pick up the book, but I was afraid to put my hand into the ectoplasm.  The right-side page bore a hand drawn map.  I gazed at it in sudden inspiration.  I grabbed the notepad where I penciled the letters of the Ouija board to which the planchette pointed moments before, Y, T, I, C, C, I, T, N, A, L, T, A.  My eyes went back to the map.  I spat out the piece of saltwater taffy that as still in my mouth.

“Atlantic City?” I read the title of the map.  “Bushwa!  Couldn’t it point to Paris, or Cairo, or even Shanghai?  But no― Atlantic City.  And why the devil did it spell the words backward?” I commented incredulously.

Valentino reached the desk in a single step.  He didn’t even flinch at putting his hand into the aura.  He picked up his travelogue.  He snapped it shut and the nimbus burst.  The noise of tiny pops repeatedly assailed my ears, like a string of lady finger firecrackers.  Bits of ectoplasm showered down in sparks.

I tried to take the book from him, but he held it tightly to his chest.  He gave me a derisive look that was probably meant to make me stop.  I desperately wanted to get another look at that page.  The only thing I had been able to make out in the handwriting was a name.  Lauren.

“Lauren was my mother’s name,” I hissed into his ear, not wanting Gramps to hear.

“I know, but save it for later,” he whispered back as he twisted away from my hands.

Pearl burst into my erstwhile secret place.  I stopped trying to get my hands on the book.  My fair-haired pal was clearly distraught.

“She wouldn’t do that,” I assured Pearl.  “I don’t think Rose has anywhere else to go, no family or anything,” I commented, but paused for a second as a suspicious feeling tickled at my mind.  “At least she never talks about them.  Why would Rose be leaving?”

“I don’t know,” Pearl said near tears.  “Especially after all those gifts came.  But she is.  She’s packing her suitcase and everything!”

When I wanted to know what Pearl meant by gifts, she described several expensive items that were left at our friend’s door.

“And there was a beautiful Chanel suit, and even a big Orthophonic Victrola,” Pearl explained.  “A note came with it that was addressed to Margosha.  So, it wasn’t even meant for her.  I told her that if she didn’t want the stuff she could just send it back, but she was all upset about it.”

Valentino surprised me by telling Pearl, “I thought you were Margosha.  The name means pearl.”

“Did you leave the goods then,” I asked him, and I was surprised to hear the accusing tone in my voice.

Pearl daubed a lace edged handkerchief at her eyes.  She brightened considerably.

“It’d be a shame to send back the Victrola.  It’s the bee’s knees,” she sniffled and said, trying to joke.

I saw Gramps shift his stance.  His hand twitched as though he was about to reach toward something.  Or maybe someone.

Valentino turned and picked up the Ouija board.

Gramps shocked me by saying, “It belongs to him.”

I turned to my grandfather in sputtering confusion.

“I didn’t realize it had a defect when I left it.  That explains why I never got a message…” Valentino told Gramps in an apologetic tone that left me more muddled than ever.  “That’s why it gave you the letters in reverse order,” he added turning back to me.

My hands were still extended toward my Ouija board.  Too many strange words and thoughts were flooding into my mind.  They caught in a bottleneck, leaving me immobile.

“I’ll get you another one,” Valentino told me.

His mouth held an impatient twist as he looked at my outstretched hands.  He sounded like he was talking to a petulant child.  The whole situation was getting me in a later.

“This Ouija board is part of my train,” he added in an annoyed tone that was tinged with guilt.  “It’s part of the navigation system.  This one was a backup.  The primary board was corrupted and a default setting sent the train here, where the backup board was left.  I didn’t know it was bringing me here.  I didn’t mean to cause you pain,” he added, looking at my grandfather.

Now I’ve exposed another of the challenges of writing “three things” and/or serials — achieving the right combination of stopping point and length. Applesauce, I do try…

Will Rose arrive safely at the abandoned subway station?  Why is she in danger anyway? Lulu has a mysterious mom that apparently no one talks about?  How the heck are a Ouija board and a Victrola part of the workings of a train?  Must be dieselpunk…  At least some of these questions will be answered next time with Hullaba Lulu Chapter 5 — Automat, Tilt-a-Whirl, Cheeseburger. 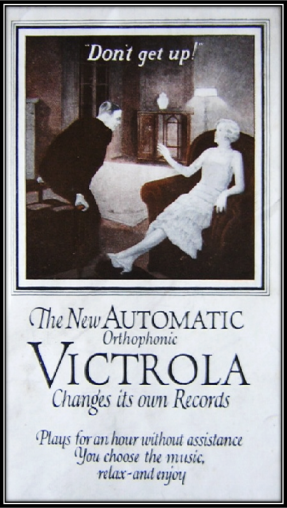 In 1925 Orthophonic Victrola* was a big innovation in sound reproduction.  The new electrically recorded phonograph records sounded harsh on the old Victrolas.  The had to consider all sorts of frequencies and even how long the horn had to be to produce a good sound — not to mention how to fold the resulting nine-foot long horn into a cabinet.

I hope you’ll click over and check out Rob’s blog.  You’ll find more fabulous images there. He’s not just a brilliant artist, he’s also an advocate for several important causes.

Thanks for visiting.  You’re the cat’s pajamas!

PS:  I can’t forget my other 1920s books — the original “three things” stories about Paisley Idelle Peabody, aka Pip, and her friends.