Building a House with Magic — The Mysterious Lodge

Sometimes things don’t go as planned — as you saw last weekend. Thank you so much for coming back again.  I’m also sorry you missed the Halloween treat from Isabel at Cakes and More 101.  I was going to feature a recipe from her last weekend.  Isabel has a beautiful blog, so I’m sure I will get to feature her again soon.

First an update, and I cringe as I tell you this…  For months I’ve said I will then I won’t, and I will, and then Are you crazy? There’s no way!  I was talking about National Novel Writing Month, affectionately known as NaNoWriMo.  It’s a huge, all absorbing effort to write a draft novel (of at least 50,000 words) in a single month — that month being November.  Yet my first NaNoWriMo effort produced Atonement, Tennessee.

My big novel writing push was going to be October.  But I didn’t accomplish nearly as much on book-2, Atonement in Bloom as I hoped.  So I’ve made NaNoWriMo part of my writing process.  (I’m not technically doing it, because I had already started the novel months ago.) Rather than reach for a certain word-count, my goal is for time spent writing each day. So far I’m doing better than expected.  However, part of doing NaNoWriMo is letting everything else slide in favor of writing. So there are important things that I’m not getting done.  Sigh… It’s just impossible to do enough of everything.

About That Mysterious Lodge 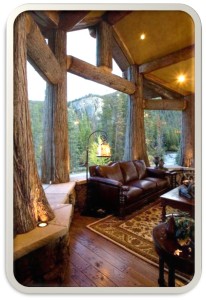 Recently Suzanne at Musings on Life and Experience commented that I was building a whole town. Her words prompted me to let this post relate to one of my favorite parts of writing fantasy — world building.  However the Atonement books are not on the scale of what they call “high fantasy,” so I really liked it when Suzanne said I was building a town. That seems perfectly suitable for my urban fantasy!

Of course an important part of creating a town in the minds of my readers is to help them see the businesses, official buildings, and the houses of the people who live there.

I needed a house for a new supernatural character.  What, I pondered, would a house look like that was built by magic?  Furthermore, what if that magic was nature-based? Finally, what if the character who would live there was very flamboyant?

The perfect illustration eluded me, but the grand lodge pictured at the top of the page will do nicely.  It’s a new house in Atonement, TN and it went up practically over night.  Hmmm… do you think there was magic involved?

This house is an important setting in Atonement in Bloom, so it needed to be very real to me.  I made quite a few “pins” for it on my Pinterest board for the novel.

My Pinterest pins are also part of my writing process.  Some times when I can’t get started writing, I choose one of the pictures I’ve saved and start writing about it. I may begin by simply describing what I see in the image, but it usually turns into a story.

The character who lives in it is flamboyant, but quirky. (Whether this character is good or bad, I’ll leave to you to decide.)  I see him as looking like an odd cross between Austin Powers and John Steed of the 1960’s TV series The Avengers.  However, he is not a secret agent or any sort of spy.  No, he’s just a supernatural being — one with his own unique fashion sense!  But I digress… More on this guy another time.

Back to the magically created house. Because of the type of magic involved I knew it had to be made of wood.  Some of you who enjoy woodworking will like this place. For this character the house had to be audaciously impressive, but also sort of… raw.

There will probably be a holiday party at this house because “Bloom,” as another Suzanne, at A Pug in the Kitchen, nicknamed my novel in progress takes place during December.  (Suzanne DeBrango has followed this blog since its early days, and I really appreciate her unfailing support.)  Anyway, I thought they might serve something like Suzanne’s hot cider recipe.